Many Trump Refugees in One Body 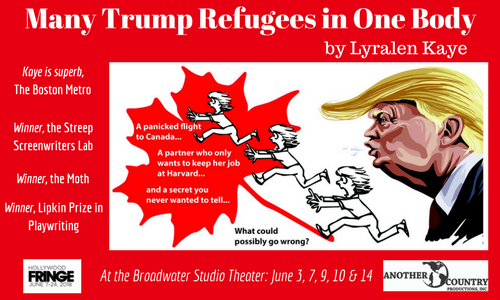 Lyralen Kaye, SAG/AFTRA, AEA, has won writing awards in every genre. Many Trump Refugees in One Body, directed by Caitlin Inglis, assistant directed by Marc Ewart and dramaturgy by Lisa Merchant, is the hilarious story of an queer feminist’s struggle to claim a new country. The story opens on election night, November 8, 2016, and moves quickly to Kaye’s decision to immigrate…on November 9!

As her much-loved and change resistant partner throws up roadblocks, as immigration questions and demands throw her into frantic posturing in trying to prove she is more together than anyone could be, as she argues with herself and her partner about when and how to leave, as she finds a safety in Canada that the US sorely lacks, Kaye takes the audience deeply inside her own experience of being “an overly credentialed multicultural activist (gluten free)” and a woman with a diagnosis that immigration lawyers are concerned might ‘mean going through a medical interview that you really don’t need.’” Through a combination of physical theater, storytelling and stand-up comedy, she lays it all on the line. “This is the time for being transparent, because there’s no other way to bring communities together.” She grins. “Except for making them laugh. And I plan to do that, too.”

Kaye is a professional actor and award-winning writer and storyteller. Most recently she won the Moth Story Slam and the Boston Story Slam and was a finalist for the Black List Women in Film competition. Her other wins include the Meryl Streep Writers Lab, the Stanley and Eleanor Prize in Playwriting, the Boston Amazon Poetry Slam and Slam Finals. She has a Pushcart nomination in fiction, and finalist credits for the Half the World Literati, the Massachusetts Council of the Arts Awards the Roy W. Dean Prize in Screenwriting and the Pride Films and Plays Awards. She believes in keeping your sense of humor while fighting for social justice, and laughing at yourself whenever possible.