Nephew of the Universe 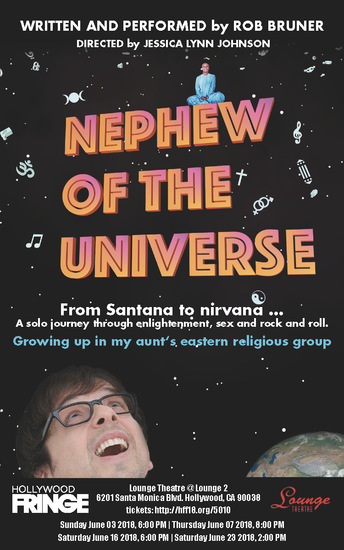 Rob Bruner takes us on a sometimes whimsical, sometimes heart wrenching journey of his twenty years in a Queens, NY eastern meditation group. Rob’s aunt Esther met Sri Chinmoy on an ashram in India where he grew up. She helped sponsor him to move to New York where they began what would become a worldwide spiritual organization that attracted celebrities and world figures along with thousands of devotees. Rob, whose spiritual name became Gauranga, lived a dual life. He was very close and dear to Sri Chinmoy and visited NY frequently, but also lived a secular life in Ottawa and Toronto, Canada. With celibacy and a simple existence being a condition of discipleship, Rob struggled with his sexual feelings and secretly harbored ambitions to be a famous rock star just like his disciple buddy, Carlos Santana. In this solo performance, Rob tells his story with honesty, wit, music and plenty of compelling visuals.