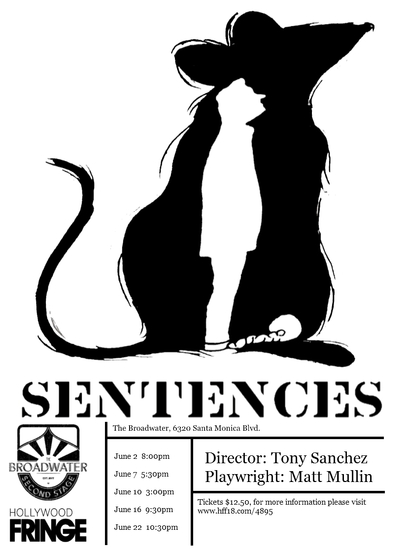 Sentences, a night of dark comedy
Inside of a shitty little jail cell.
Jumping from farce to violent reality,
Revealing the stories they have to tell.
Will, Terry, JayJay, and even Laurel
Have highs and lows throughout this tale of woe.
If you think this story has a moral,
Beware, prepare to despair because no
Thing is said to beget a smart remark.
Discover where guilty thrive and innocent die,
Where the wise uneducated show stark
Contrast to what you might be expecting.
An illusion of an allusion to Steinbeck,
Sentences will end raising the hairs on your neck.

Although not as prolific and awe-inspiring as John Steinbeck’s “Of Mice and Men,” Sentences seeks to bridge the gap between the dark comedy and philosophical commentary. Based off of the ideologies of Steinbeck during 1937, this piece showcases the commonalities seen in present and past. In this odd story, Will, JayJay, and Terry contrast in opinion and background. But as they cross intellectual planes, it becomes apparent that they are not as different as first appearance. Things take a turn though, when the they find themselves asking what to do when three inmates need to hide a body.