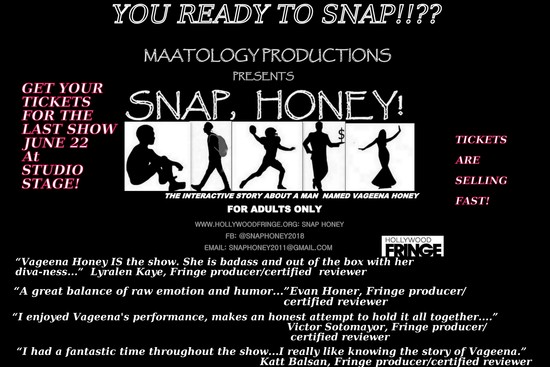 Snap Honey is a hilarious comedy with some elements of melodrama about international female impersonator, Vageena Honey, who returns home to get interviewed and perform her one woman show DRAG WHORE about her rise to fame. The production takes place in two locations at the same time—-Vageena’s one woman show at The Fox Theatre and the set of talk show host Dr Jones, a “Dr Phil type” on his popular show INTROSPECT. Told in flashbacks, Snap Honey gives an in-depth view of Vageena’s life from her love of the Supremes as a boy to his sexual torment from a high school bully and her first time performing as Vageena. Lastly, the audience is part of the production in various scenes involving her one woman show. THE PLAY IS 90 MINUTES WITH NO INTERMISSION, HAS ADULT SITUATIONS AND BRIEF NUDITY.

“Fringers Alliance wishes to support the diverse Fringe community. As a thank you, enter “FRINGERSALLIANCE” for a 20% discount on any Fringers Alliance participating shows. Check www.hollywoodfringe.org for theater location and showtimes."
Learn More at outstagin.blogspot.com/2017/11/maatology-productions-presents-snap.html