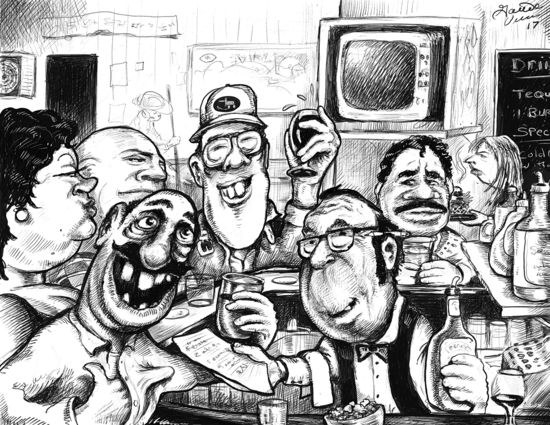 Songwriter Richard Levinson has written tunes for dozens of TV shows and films, as well as his own musicals “Savin’ Up for Saturday Night,” “Priscilla’s Perfect Day” and last year’s Fringe hit “Thanks A Lot – My Gratitusical!”

He has contributed to many other live shows including “Sketches from the National Lampoon,” “Clown Bar” and dozens of Sacred Fools’ “Serial Killers” and “Fast ‘n’ Loose” episodes. A lot of his songs are funny, some of them are not, and others were not really supposed to be but turned out that way. He has also written more commercial jingles than he cares to remember.

This is the kind of history that leads one to spend too much time in drinking establishments over many years, and sometimes to write songs about them. 12 of them are roughly thrown together here like a bunch of divebar regulars should be, into one 50 minute binge he’s calling “12 Bars.” Which is sort of a pun. You probably got that already.

Original cover art is by Gaetano (Tom) Vicini, with whom Levinson also collaborated on the text/art book “Count,” available at lulu.com

Richard would love to hear from you at [email protected]
Tom’s website is www.drawingfool.com

He thinks it’s weird to write about himself in the third person so I’m going to stop now.