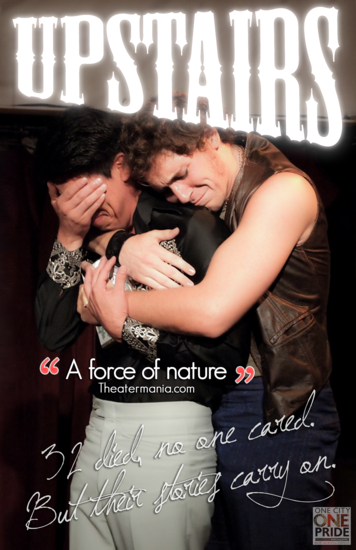 “A force of nature. Upstairs brings closure to a city that has suffered this open wound for too long, and demonstrates the transformational power of live theater.” – Paul Christopher, Theatermania.com

“Self’s effort to resurrect the victims’ stories amounts to an autopsy on the human soul and explores the motives of the suspected arsonist in the case, lays open the ugliness of sexual oppression and characterizes what those who died in the fire may have envisioned in the waning moments of their lives.” – The Crescent City News

“I haven’t been so moved by a theatrical performance in years. It’s both heartbreaking and heartwarming.” – David Gerrold
Hugo Award Winning Author and Playwright

“Upstairs – a Musical Tragedy” tells true stories from the Up Stairs Lounge fire, a 1973 gay bar arson that took 32 lives in New Orleans. We see the fire through the eyes of three survivors, Buddy the bartender, nerdy Reginald, and the haunted Agneau, as each relives that tragic night, evoking memories and ghosts in an attempt to cope with unspeakable loss. But, as the night draws to its inevitable conclusion, Buddy and Agneau discover secrets about one another that challenge their capacity for forgiveness and their hope of ever finding peace.

Created for the 40th Anniversary of the fire, this was the first theatrical work to address this shamefully unexamined tragedy.