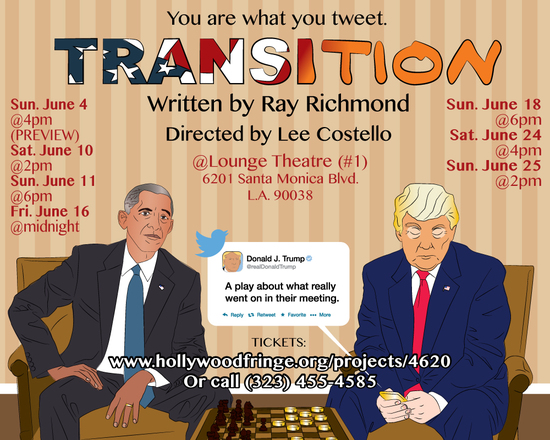 “Transition” is a two-person, 80-minute production that brings the audience into the Oval Office of the White House to imagine how the meeting played out between President Obama and Donald Trump on November 10, 2016. The show takes us inside both that unfathomable visit and the heads of two powerful men with very different agendas – a genuine clash of the titans.

“‘Transition’ is ingenious and as close to perfection as one can get…A small gem and a delightful night of theatre.”
-Joe Straw

“The performances aren’t just Vegas impressions but get to the crux of these two men.”
-L.A. Daily News

“This sucked. Is it possible to get my money back?”
-No One

While the play features many comedic moments, it is neither sketch nor caricature but a serious attempt to envision what really happened in that room. It represents a sincere artistic rendering of the actual voices of both men as we witness their chess match-like interaction.

The entire performance takes place on a single set with no break, highlighting moments of irreverence, drama, catharsis and pathos – the outrageous as well as the frightful and poignant. It had its first production run at The Lounge Theatre in Hollywood from March 11 to April 16, 2017.