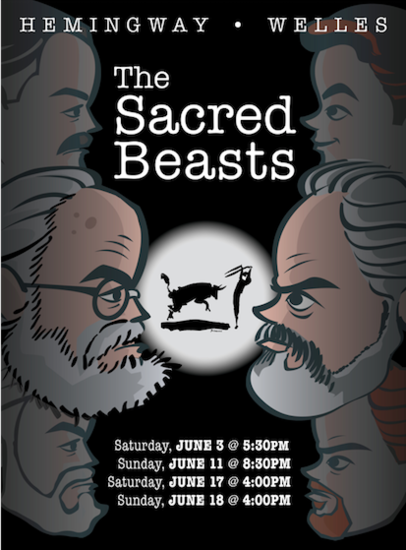 Check out our review from Noho Arts District!
http://nohoartsdistrict.com/theatres/theatre-reviews/item/5170-hollywood-fringe-the-sacred-beasts

The booze and resentment-soaked real life friendship of Ernest Hemingway and Orson Welles is conjured in three scenes spanning three decades with the besotted wordsmiths played by different actors in each stage of their lives. Celebrated as much for their personal lives filled with prodigious beard growth, cigar chomping, and romanticized alcoholism as anything they actually wrote, these two tempestuous, swaggering egos in human form are often elevated as mythic symbols of a particularly distinct and antiquated flavor of Manhood. Here we break the idols and display these sacred beasts as they were. Watch them drink, fight, hunt, smoke, and bloviate their way across such issues as easy success, hard won failure, and the corrosive effects of hypermasculinity. Claim your ringside seat as these fists of genius at last come to blows.