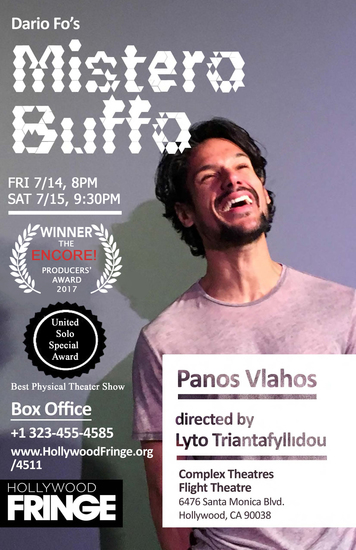 Mistero Buffo will explore a social interpretation of the Passion Stories. Through monologues, soliloquies, storytelling, dialogues, and crowd scenes, a Giullare – a Jester or a Fool – will invite the audience to his provocative Comical Mystery, redefining the notion of authority and order. Mistero Buffo, written in 1969 by Nobel Prize winning playwright Dario Fo is a political exploration of popular Medieval Mysteries, consisting of several scenes re-imagining Biblical Stories and establishing new protagonists against religious rule. This is the second realization of Mistero Buffo featuring Panos Vlahos and directed by Lyto Triantafyllidou. After a successful run at the Balcony Theater in May 2016, the Guilare returns on stage and invites the audience to his Last Supper, in order to challenge the puritanical stereotypes of religion traditions with laughter and gives a human dimension to the concept of miracles. Mistero Buffo won the Best Physical Theater Award at United Solo Theatre Festival!