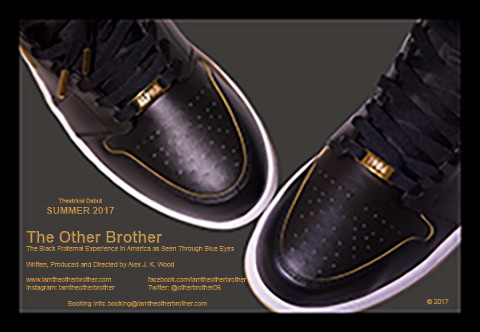 The Other Brother: The Black Fraternal Experience in America as Seen Through Blue Eyes s based on the life experiences of Alex Wood. While his connection to the African American community began before the age of 1 with his Foster Mother Lucille McGee, the focus of this stage play is Alex’s pledging and participation in the first collegiate fraternity for African American Men, Alpha Phi Alpha Fraternity, Inc. Not only was his decision to pledge Alpha a surprise to many in the Spring of 1990 (Alpha Xi Chapter), but his continued involvement has “raised eyebrows”, fostered lively discussions, and even borne some criticism over the years. A Life Member of this distinguished organization, Alex has traveled to many cities and participated in Fraternity conventions, community service programs, and social events. He has lived in several Regions of the country and has served in numerous positions and offices including District Director for Canada. Over the years he has often been greeted with strange stares and curious inquiries as both members of the Fraternity as well as those outside the organization encounter the strange anomaly of a “White Alpha”.

His belief that “everything happens for a reason” has inspired Alex to share his story with others. It is his hope that in doing so he can reach out to those who may be afraid to ask why? As Alex says, “Ultimately it is fear difference, fear of that which we don’t understand that divides us as mankind. Each of us has a responsibility to help foster harmony and eliminate that fear.” The Other Brother seeks to broaden perspectives, answer the burning inquiries, and most importantly serve as a catalyst for changing peoples’ hearts and minds.