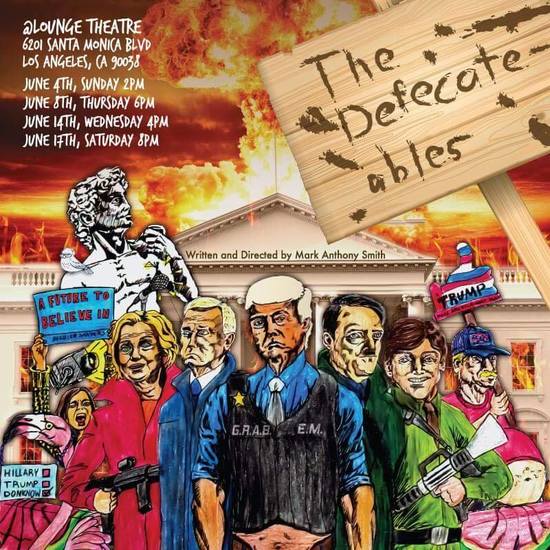 The Defecate-ables is a comedy written in rhyming couplets written by Mark Anthony Smith and also includes music numbers written by Lindsey Whitener. The show will go up at the Hollywood Fringe Festival! This year Caffeine High Productions will produce this wild stylistic comedy at the Lounge Theatre! The Lounge Theatre is not only a great theatre venue right on the same street as Fringe Central—the Lounge contains a bar with beer, wine, and coffee drinks!

The Defecate-ables is a play that takes a strange look at the 2016 election, which nobody can argue is comedy in itself—it writes itself, so we had to be very creative in taking a shot at making this ridiculous election even funnier. The play focuses on a Scared American, played by Alicia Ivanhoe who attempts to calm down a scared crowd consisting of a Bernie Sanders Supporter (Vanessa Toyama), a Liberal Lesbian (Evan Wallace), a Closet Racist Trump Supporter (Hailee Rose), and an Undecided Voter from Florida (Lindsey Whitener). While the world is in chaos, the story also follows the schemes of Donald Trump, played by Ashley Danielle Simpson and the failed schemes of Hillary Clinton, played by Evan Wallace. This fantasy like, theatrical take on storytelling also takes a look at other failed elected leaders who did not exceed expectations such as King David of the Bible, played by Hailee Rose, the strange erotic exploits of 1800’s religious figure John Humphrey Noyes played by Vanessa Toyama. What makes this play even more amazing is that seven actors such as the actors listed above along with Lauren Alexa will all take on 34 roles!