Steal Away: The Living History of Harriet Tubman 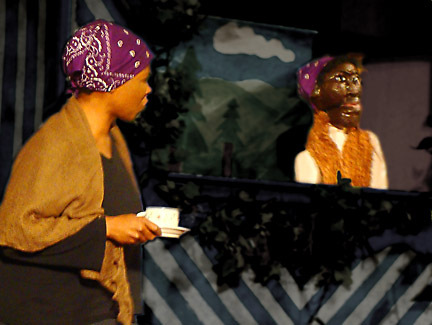 “Steal Away: The Living History of Harriet Tubman” tells the story of one of America’s greatest heroines—from her youth as a slave, to her service on the Underground Railroad, to her continuing efforts to help others in need throughout her lifetime. A native of Auburn, New York (where Harriet lived until her death in 1913), playwright Rick Balian’s research for the play included interviews with Harriet’s descendents and the curator of the Harriet Tubman home. (Grades K-5)

The New York Times called Steal Away “…a fascinating and poignant production. Although aimed at children, the play is also enlightening for adults.”

“The seamless interface between actors and puppets provided a magical atmosphere of supreme storytelling. ‘Steal Away’ stole our hearts as it delivered a poignant portrait of Harriet Tubman.” Lynn Berkowitz, Director of Education, Allentown Art Museum

“Steal Away” is a production of New Perspectives Theatre Company’s World Voices program. World Voices presents engaging, authentic fables and stories from around the world. Performed with puppets, live actors, and music, these tales serve as an introduction to different cultures, and illustrate the strong common bonds among all people. After the play, kids participate in a game or activity related to the story, and learn about the country or culture represented in the story.

New Perspectives was founded in 1991 as a multi-racial ensemble dedicated to using theatre as an agent for positive social change. Our mission is to 1) develop and present new plays and playwrights, particularly women and people of color, 2) present classic plays in a style that sheds new light on our lives and work, and 3) present theatre to under-served audiences—especially young people—to build life skills and promote participation in our society. Artistically, we are interested in returning theatre to its ancient role of gathering the community to examine social, political, and spiritual issues that affect us as individuals and as a whole. Our emphasis on multi-racial casting and the development of new works by women and writers of color is an attempt to bring to that examination a range of voices that reflect the true diversity of contemporary America. Our aim is not to exclude, but to cast a wider net.

Rick Balian is an award-winning writer whose shows for kids and adults have been performed all over the country. His comedy “The Brannock Device” is published by Samuel French. He’s written several plays for the renowned youth touring theater Merry Go Round Playhouse and for New Perspectives Theatre’s World Voices program. Rick was an artist-in-residence at Elmira College and was awarded a residency at the Millay Colony for the Arts. He’s currently working on “Rattlesnake Girl,” a play that takes place in Korea.