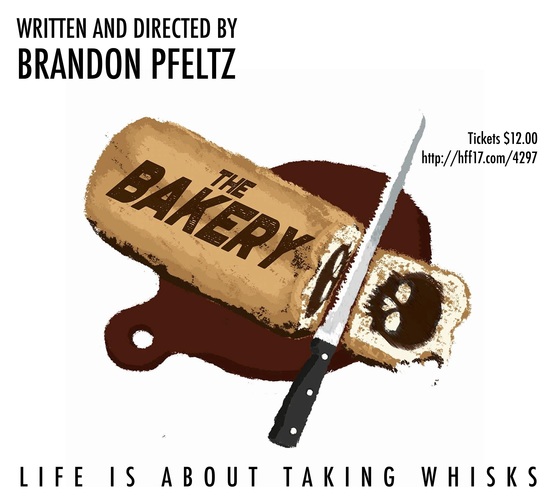 The Bakery is a dark comedy that centers around Nicholas, a man with big
dreams but no dough. Nicholas is the proud owner of Guerdon’s Gay
Gourmet, a failing bakery that can’t seem to attract customers, but attracts
Nicholas’ dimwit of a brother, Huck, and delinquent of a cousin, Aaron, to work for him. Just when our hero thinks that things can’t get any worse – they do. An abrupt foreclosure notice from a local cop/professional Sasquatch hunter, Adley, accompanied by the return of an old rival, Neil, sparks Nicholas into trying to win back his bakery. He thinks that he can raise enough money by using a local bake sale. Huck thinks that he can inherit enough money by seducing Neil’s assistant, Kate. Meanwhile, Aaron, and his friend, Sam, break into the bakery in a fit of petty anger and fill every container of dough with rat poison. Nicholas unknowingly uses that dough, which in turn, causes him success at the bake sale. Nicholas’ problems finally seem to be a thing of the past when suddenly Neil winds up dead.
Did the rat poison kill him? Or someone else? Will Nicholas be able to save his bakery, or are his dreams toast?