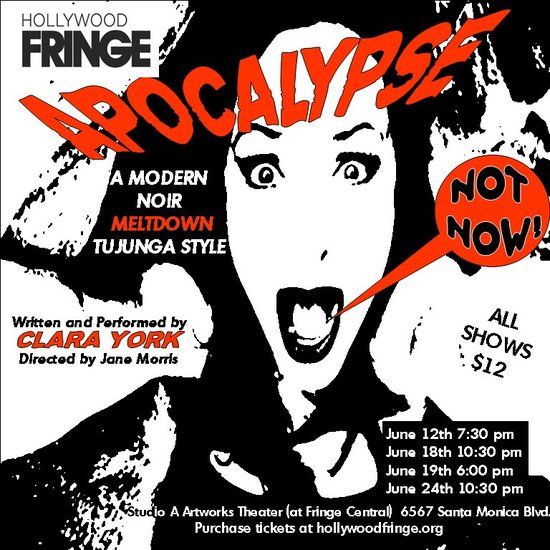 LA THEATER REVIEW by Marcus Kaye- June 26, 2011
Apocalypse, Not Now! showcases stoner, alcoholic and former hand model, Clara York. Telling the story of how the fires in Tujunga forced her agoraphobic little self out of her home after nine years, only to be faced with two other natural disasters in the form of flood and mudslides. Stronger than the natural disasters she recounts, York herself is a comedic force to be reckoned with.
The solo show is smartly broken up into three parts: fire, floods, mudslide, which gives the wildly entertaining York three stories to tell amidst her larger one, effectively making the time pass quickly. York laughed in the face of the many apocalypses she faced- shoe shopping during the fires, picking up hardware store employees during the floods, and diving into the mudslides.
York’s dangerously eccentric personality allows her to easily embody the other characters she encounters in her story in such a way that one isn’t sure if she is acting, or simply exhibiting another personality buried in her fragmented psyche.
Direction by Jane Morris keeps York active (although one would suspect that, with her unparalleled energy, York would remain active on her own) and the lighting allows for location and tonal changes that enforce York’s storytelling.
York laughed in the face of danger, but luckily for audiences, all they need to do is laugh in the face of her hysterical show.
Apocalypse, Not Now! played June 12 at 7:30pm, June 18, 24 at 10:30pm and June 19 at 6pm.Apocalypse, Not Now!