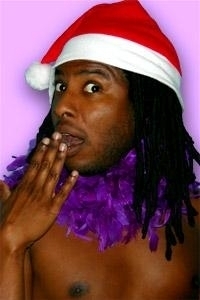 Les Kurkendaal is remounting his show Christmas in Bakersfield for another run at The 2nd Hollywood Fringe Festival . When Mike brings his boyfriend Les home to visit his Caucasian , Right Wing Republican Family for the Christmas Holidays , he realizes that he forgot to tell them one very important thing , that Les is African American. Oops ! This show puts the fun in dysfunctional . Steven Leigh Morris from the LA Weekly reviewed the show and said :
Les Kurkendaal’s solo performance tells of his visit to his boyfriend’s family in “California’s armpit,” at their Bakersfield manse. They knew their son was gay, but he’d neglected to tell them that his lover was black. In a slightly mannered style that stresses clarity over mystery, Kurkendaal proffers a compendium of bigotry and homophobia, through which Kurkendaal is still able to win them over—even terrifying “Grandma,” whose very name sparks alarming noises over the sound system. It’s a sweet tale that aims to cut to the humanity of bigots and homophobes. Forgive them, Lord. They know not what they do.
Matthew Everett reviewed the show at The Minnesota Fringe Festival and he said :
Les Kurkendaal brings us a remount of last year’s popular Christmas In Bakersfield, which was great news for me, because I got to share it with Mom. She thinks he’s a great storyteller, and I agree. Les was one of a number of pleasant surprises in last year’s Fringe for me. After several years of missing his shows but finding him charming in person, I finally caught Christmas In Bakersfield. One’s always worried, the first time you go to see a friend’s show, will they be good? I want to like them. No worries. Les was fantastic.

(We were five minutes late dashing over from another venue (that’s what we get for talking to people afterward), but thankfully we’d seen the equivalent opening five minutes at the out of towner preview earlier in the week, so we entered to familiar words and knew right where we were in the story.)

Les is beguiling. He loves our Fringe and it shows. He goes to a lot of other Fringes and finetunes his productions on the road, but he loves coming back to Minnesota as his summer home away from home.

The man sets you completely at ease as he weaves his universal tale of getting to know the in-laws in all their bewildering glory. While the story has the additional twists of race and sexual orientation, this isn’t some strident presentation of personal politics. What makes this story work so subversively well is that Les has us loving these goofballs just as much as he does.

One can’t make the people we disagree with disappear or instantly change their ingrained behaviors. But by making the political personal, and getting to know “the other,” we have the power to change things for the better from the inside, over time. When the in-laws come to Les’ defense at a holiday party, he realizes he’s won them over, just by being who he is, and not apologizing for it.

Les not only knows how to tell a story, he knows how to work a crowd. He makes it all look so easy, you’re liable to forget what a skilled craftsman he is at what he does. Not all stories are worth telling. Not everybody can tell a joke. Les knows a good story when he sees it and knows how to deliver it. He creates each character in turn and builds a very foreign world around himself.

Christmas In Bakersfield is a fairy tale that starts with “happily ever after” and proceeds from there. Learning to live with someone, and their family, isn’t always easy. But in Les’ hands, it’s always entertaining.