Giving Up Is Hard To Do 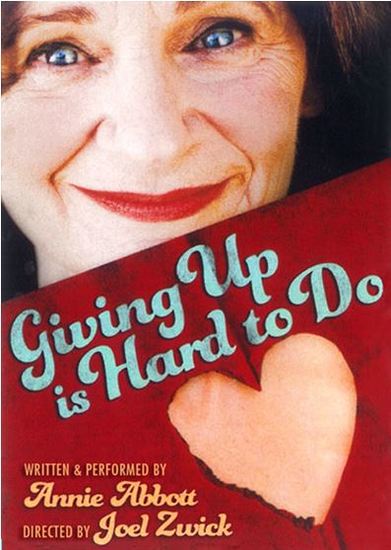 Annie Abbott (Transparent, Castle, Californication, The X-Files, 9 years on LA Law) wrote and performs Giving Up Is Hard To Do, an irreverent, humor-filled take on the audacity and grit needed to be a working character actress and to survive the hurdles of online dating.

To set the tone, our storyteller shares how she created her first break: while still a student at Brooklyn College, by chance she overhears that a touring Broadway musical has lost a chorus girl. In minutes she’s singing over the phone, finally convincing the worn-down director to hire her. The tour bus leaves in an hour, so she runs home, packs, catches the bus, and learns the entire show – music and choreography – in the aisle en route to the first performance.

Many years later, that determination and audacity resurface when she finds herself suddenly widowed, and forced to face the rollercoaster ride of online dating. But coffee date by coffee date, she encounters an unforgettable, ruefully funny crew of oddball characters on her way to a new life.

Joel Zwick (My Big Fat Greek Wedding) directs this high-energy production, which runs 70 minutes and is performed without intermission.