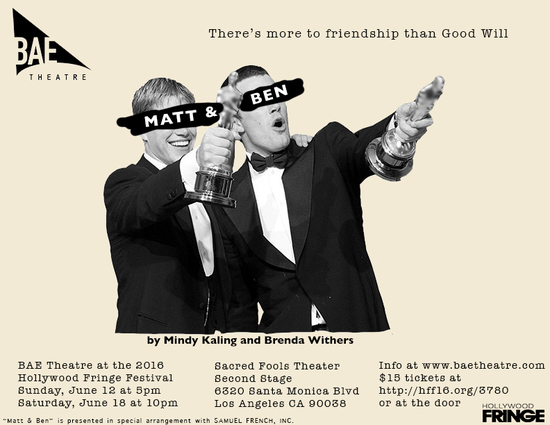 “Matt & Ben” by comedy genius Mindy Kaling and her equally hilarious bestie, Brenda Withers, follows the beautiful friendship between young Matt Damon and Ben Affleck. When a mysterious script titled “Good Will Hunting” drops down from the heavens into the middle of Ben’s bachelor pad, they are forced to face the future of their careers, and their friendship, under circumstances beyond their wildest imaginations. Hilarity erupts; chaos ensues.
.

Isabella Petrini-Matt Damon
Isabella Petrini is an LA born, Chicago raised, NY trained actor. Although each of these cities hold their own special place in her heart, she is specifically passionate for the theatre community of Los Angeles, aspiring to help it grow, change, and create a greater impact in American theatre. This is her second production with BAE Theatre. She also compiles documentary theatre, reads more plays than most people, and works as a discussion facilitator for Center Theatre Group.

Celia Mandela-Ben Affleck
Celia has enjoyed all the creative fun and challenges of being Ben Affleck. It’s been a great joy figuring out how to have such an amazing bromance with Matt Damon. She thinks Ben and Matt are really gonna love the show when they come and see it. Thanks to BAE Theatre for giving her the opportunity to play and goof off. Thanks to her family and friends for constantly believing and encouraging her. Thanks to God for the talents she’s been given. And thanks to SMC, USC, and BADA for giving her the tools to use her talents. Cheers!

Bryn Woznicki-Director
For as long as she can remember, Bryn has alternately carried a camera or a pen in her hand. She directed her first play at age 8, and a mere 10 years later (wink wink) she’s still at it. A filmmaker by trade, Bryn has produced and directed dozens of projects, taking home awards and accolades from several festivals, even screening a short film at the 2012 Cannes Film Festival. Bryn’s first feature film, Her Side of the Bed, is in post production and set to be completed in June.

Emily Keaney-Producer
Emily Keaney is a Los Angeles based producer and founder of BAE Theatre. She is proud to be a part of the diverse Los Angeles theatre community—a community she grew up watching, learning, and drawing inspiration from as a native Angeleno. Most recently she produced the 2015 Hollywood Fringe Festival hit “Missed Connections”. She is also production coordinator on AMC’s “Talking Dead”.

Anthony Soto-Set Designer
Anthony Soto is a Los Angeles Based Set Designer and Scenic Artist with a B.A. in Theatre Arts from CSU Sacramento. Credits in design include Sweet Charity, Shrek The Musical, Seussical, A Funny Thing Happened on the Way to the Forum, Bugsy Malone, Clue, and Peter Pan. Credits in Scenic Art include Crazy Ex Girlfriend on the CW, The Golden Globes, The Academy Awards, The Last Hidden Temple (in progress), and the Netflix original series The Ranch. He would like to thank the entire cast, crew, and creative team for all their hard work, professionalism, and collaboration.

Tara Meyer-Costume Designer
Tara Meyer is a graduate from Southeast Missouri State University with a BFA in Theatre Design, emphasis in Costumes. Her past production experiences include designing or constructing costumes for plays, musicals, and dance productions. She is currently working as a Costume Production Assistant on the Amazon series, Hand of God.

Kenny Zhao-Sound Designer
Kenny Zhao is a sound designer, composer, and recording artist. He graduated from Northwestern with a major in sound design, music technology, and composition, where he sound designed the university’s productions of Cabaret, Scorched, and The Visit, among others. Kenny spends most of his time working in the music industry, lending his ear to singers, music producers, filmmakers, and ad agencies alike.