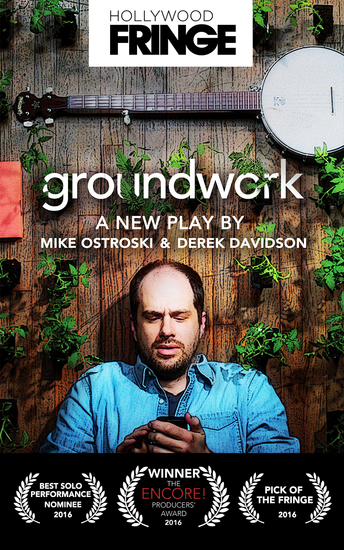 STAGE RAW REVIEW – “Directed by Davidson with punch and potency, this story…is furiously engaging. [Ostroski’s] delivery, a combination of slam poetry and conversation, opens up worlds to an unsuspecting audience. Groundwork plants the seed of ideas worth harvesting.” – Vanessa Cate

“Grow a garden.” The idea hits Paul like a meteor hitting the planet and he’s off. He reads the books, sows the seeds, and before his first tomatoes ripen, departs on a crusade to save the planet one precious seedling at a time. Saving himself, however, will prove a much harder battle.

“I’d never thought about gardening before, but one day, out of the blue, I just had to get my hands in the dirt. It was this deep need that really piqued my curiosity,” says Ostroski, describing the impulse behind Groundwork. “The context is backyard gardening, but the focus of the play is the struggle to find inner-sustainability within a world of melting ice caps and rising tides.”

“Mike Ostroski is a force of nature. An actor with access to a seemingly limitless energy source which he uses to fuel character after character in this tantalizing yarn that encompasses more square footage than most museums. It is a performance that is quite simply one of a kind.” – Eric Lange (Narcos, Lost, The Bridge)

“Groundwork is simply brilliant and Mike Ostroski gives a phenomenal performance. It’s a comedy with a subtle poignant message that resonates deeply – I was left thinking about the play and its themes for days afterward. It’s so refreshing and exciting to witness extraordinary theatre. Groundwork has it all.” – Michael D. Cohen (Whiplash, Henry Danger)

“An explosive, entertaining and poignant journey of a man’s quest to save the world! Loved this show!" – Christina Evans

*This Actor is appearing courtesy of Actors’ Equity Association.