The Collection by Harold Pinter/Anniversary by Rachel Bonds 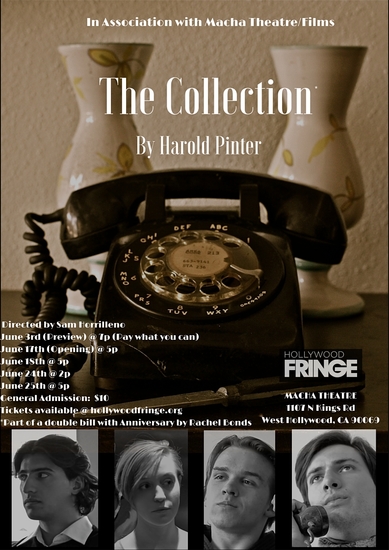 Two one act plays dealing with the way we inadvertently allow ourselves to create chaos in our romantic relationships.

In Harold Pinter’s ‘The Collection’, Stella’s makes a confession to her husband James that she’d been unfaithful to him with Bill, a dress designer for a rival company, on a business trip in Leeds. When James begins making mysterious phone calls to Bill’s home to confront him about the accusation, Bill’s lover and roommate Harry begins to get suspicious that Bill may be keeping a secret from him…but was Stella telling James the truth?
Pinter’s one act play explores the menacing mind games that we inexplicably play on one another…and their futile aftermaths. (Directed by Sam Horrilleno)

Anniversary by Rachel Bonds (Samuel French):
While grappling with a significant loss, Penelope embarks on a new relationship, attempting to function in a world that seems to speed ahead without her. (Directed by Tyler Smith)