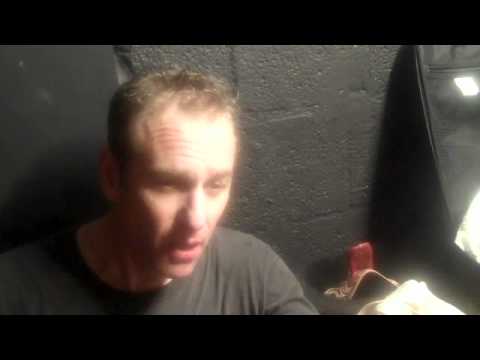 A ONE MAN PHANTASMAGORIA…AND A VERY NAUGHTY BUNNY.

Armed with his unique bag of tricks, recovering magician Albie Selznick confronts his daemons in this mind-bending show about illusions, phantoms and wonderfully wicked nightmares …all the while being chased by a malicious bunny. Smoke and Mirrors is a thrilling mix of magic, illusion, storytelling, and spooky madcap fun.

Written and performed by Albie Selznick. Directed by Bettina Zacar.

Albie was co-founder of The Mums, a popular circus/ theatre trio of the 80’s/90’s. The LA TIMES said, “The Mums do for the arts of juggling and magic what Elvis did for rock and roll,” Andy Warhol gave them a two-page pictorial in INTERVIEW magazine, and The LA WEEKLY put them on their cover calling them “The Best Performance Troupe in LA”. The Mums opened for rock bands Devo, Berlin, and Duran Duran, and counted among their fans David Bowie, Sting and Ry Cooder. Their theatrical works were produced in LA at the Matrix, The Odyssey and The Taper Too, and were directed by Tim Robbins and Paul Sand among others. The Mums received multiple theatre awards.

Today Albie is known primarily as an actor, performing on TV, stage and film. He is a member of the Road Theatre Company where he has performed in new plays by Keith Huff and Craig Wright. He has played the Fool in Robert Wilson’s King Lear and Mercutio in Deaf West’s Romeo and Juliet. He performed opposite Glenne Headly in Detachments, and played Chandel/Poche in the Ovation Award-winning A Flea in Her Ear at Stages Theatre Center. On Television, Albie is probably best known as Rabbi Ben from his two years on Suddenly Susan. He has guest starred on Dexter, Desperate Housewives, all three CSI’s and currently plays the evil ex-D.A. Owen Pomerantz on The Young and The Restless, and deputy D.A. Charles Atherton on Southland.

Bettina Zacar is a Director/actor/designer/stage manager. In love with theatre; Bettina has found her voice in directing. Originally from a suburb of Washington DC, Bettina grew up in several local theaters. After changing her college major several times she couldn’t deny the drive of her love of theatre. Jump cut – many years later… she moved to LA become a member of the Road Theatre company where she won a Valley Theatre League Artistic Director Achievement (ADA) Award and more recently recently honored with an LA WEEKLY best actress nomination and a best ensemble WIN for the World Premier of Tom Jacobson’s The Friendly Hour.
Bettina would like to thank her hubby for his patience and thank Albie for his inspiration and of course Sam for that extra push.