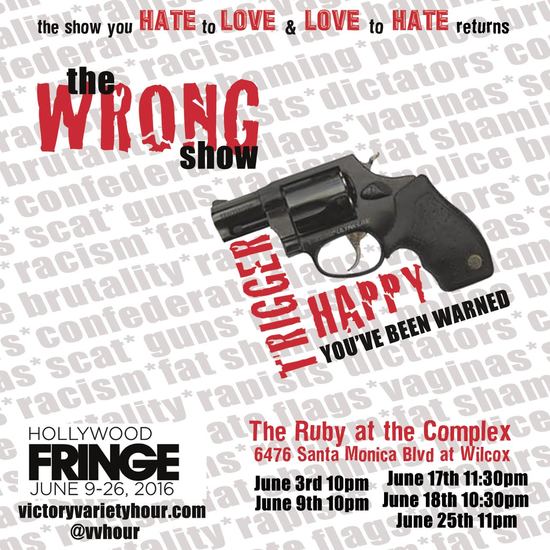 FOR IMMEDIATE RELEASE: The Wrong Show at the Hollywood Fringe Festival

To request a press pass for The Wrong Show, please visit http://www.hollywoodfringe.org/press. For questions, or help acquiring a press pass, please contact Penny at [email protected]

LA’s award-winning “Best Badass Burlesque” show returns with the show you Hate to Love, and Love to Hate.

Interracial Freaky Friday—what happens when black and white want to switch skin tones?
The hot and sexy—Schiesse!
Tapping the vein—addiction can happen in many forms.
Period Piece—yes it’s exactly what it sounds like…
Gun Safety for Children—Daddy’s new glock would like a few words with you!
It’s time to play America’s favorite game show—Name That Rapist!
Pants Down, Don’t Shoot—the epic ballad of a poor tranny trying to find her way to a toilet.
Fuxxx News—the news is one giant beauty pageant—who will be crowned “Miss Information”?
Three Piece Fat Suit—when plushy plus-size is not shed in a fit of fat-panic.
The Fascist Follies—a chorus line of cutie dicataors show you why fascism is so seductive.

Tickets: $12
Available May 1st at http://www.hollywoodfringe.org/projects/3438?tab=tickets

As part of the Hollywood Fringe Festival
At the Ruby Theater at the Complex
6476 Santa Monica Blvd, Los Angeles, CA 90038

“Isn’t your mama’s burlesque, or your daddy’s either. It’s more like your pervy uncle Larry’s. ” LA WEEKLY

Voted in the top 3 burlesque shows in LA, LA WEEKLY

Now in it’s 10th year, under the creative direction of award-winning burlesque dancer Penny Starr, Jr., VVH is known for it’s mix of high glamour and a sick sense of humor featuring all manners of genders, races, and sizes. They were winners of Best Troupe at the Hollywood Burlesque Fest 2013, Bronze Medal Winners at the International Burlypicks 2013, and Best Troupe at ABurlyQ Burlesque Fest in New Mexico.

The show has a rotating cast of accomplished stripteasers, comedians, and musicians and has featured guest stars like Prince Poppycock, Margaret Cho, Kate Flannery (The Office), Greg Behrendt (He’s Just Not That Into You), and Vernon Wells (The Road Warrior), to name a few.