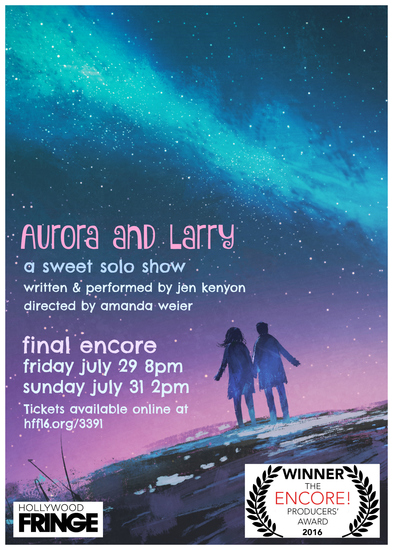 A hippy fights to keep her soldier brother from surrendering to alien encounters in this sweet solo play with music. Intergalactic premiere!

Raised on a seventies hippy commune, Aurora and Polaris were instilled with a mission to be “lightbringers” for this corner of the Milky Way. But darkness calls to Polaris – now Larry – who struggles with chronic PTSD after serving in Desert Storm. Flaky Aurora might be his only chance against a collapsing black hole of depression…if the space aliens don’t get him first.

This new play is produced by the same team behind the geriatric thriller “The Last Known Recording of the Lovely Lenore Sisters”, winner of an Encore Producers’ Award at the Hollywood Fringe Festival 2015.

Winner of an Encore Producers’ Award 2016!