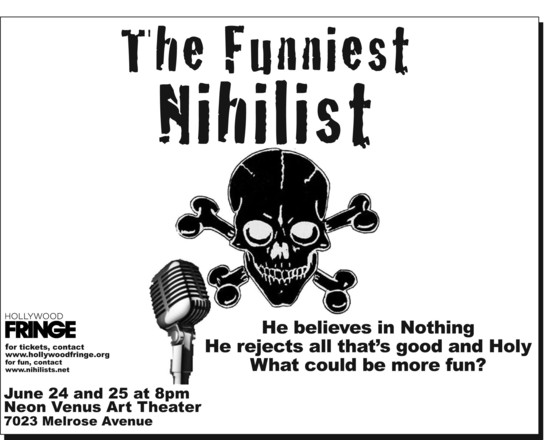 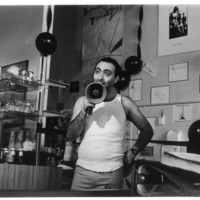 He doesn’t believe in anything. He rejects all that’s good and holy. He’s the most famous living nihilist of this century. And now you can laugh at him. Elisha Shapiro, Los Angeles based nihilist conceptual artist, presents The Funniest Nihilist as part of this year’s Hollywood Fringe Festival.

Since 1984, Shapiro has brought you The Nihilist Olympics, a Nihilist Party run for president, LA County Sheriff, and in 2006, a campaign of Governor of California. He has produced the Nihilist Film Festival, the 2000 Nihilism Expo and the Nihilists’ Corner cable show. He has also performed standup at many Los Angeles comedy clubs. So why is he doing all these annoying things? That is the subject of The Funniest Nihilist.

This show will be presents twice at the Neon Venus Theater on Friday and Saturday June 24 and 25 at 8 pm. The Neon Venus is located at 7023 Melrose Avenue, just east of La Brea. Admission is free, but seating is limited. Contact the Hollywood Fringe Festival for tickets.