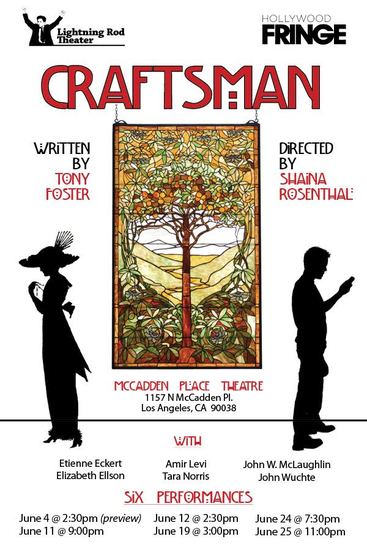 In CRAFTSMAN, the troubled lives of two couples, one in 1910 and the other a hundred years later, play out simultaneously in the same Southern California Craftsman house. It’s a time bending dramedy, blending romance and intrigue with magical realism.

A young gay couple in the year 2010 launches into the wild fray of becoming first-time homebuyers, but the well-worn Craftsman home they are viewing is not all that needs mending. Because of a long kept secret, the relationship between Ryan and Mark may be on the brink of collapse. Worse still, Ryan comes to believe the house is haunted by a ghost of a past resident. Meanwhile, a married couple in the year 1910, Rebecca and her husband, Charles, are not quite as happy as they appear to be. And Rebecca has begun to sense an other-worldly spirit inhabiting her house.

When Ryan and Rebecca finally make contact the hundred year difference between them blurs into one. The two gain newfound insights into their lives which allows each one to seek the truths of the other. But by crossing this uncertain threshold, do Ryan and Rebecca run the risk of never returning to the time they know?

This Lightning Rod Theater production grapples with the ever-cyclical themes of life, love and death. When the past is present, home is the future.