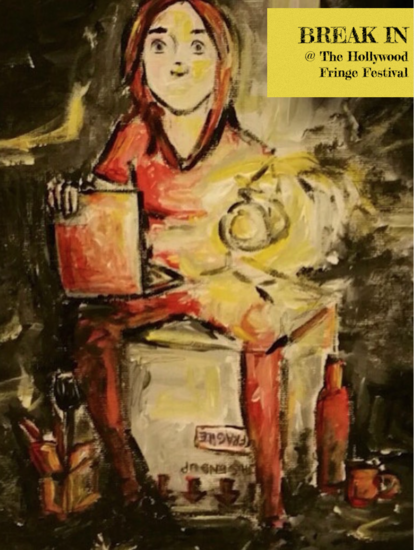 BREAK IN is a quick paced comedic one woman show. Getting sucked in the mind of a loner never felt so good.

The uniqueness of BREAK IN lies in the use of sound effects, voice over and music, heightening all senses and tapping into the audiences imagination in order to connect with one actor on stage for 30 minutes who says absolutely nothing.

BREAK IN is like an audiobook on stage where getting sucked into the mind of a loner never felt so good. All characters will be played by Lisa Cordileone through Voice Over and pumped into the theatre for a unique twist on a silent comedy. What she is thinking the audience is hearing along with all 17 other characters. The story unfolds like a combination of old school radio play meets interactive theatre.

Our all female LGBTQ friendly cast and crew is bringing a taste of Second City and Chicago Theatre to Los Angeles and The Hollywood Fringe Festival. #chitown #hff16