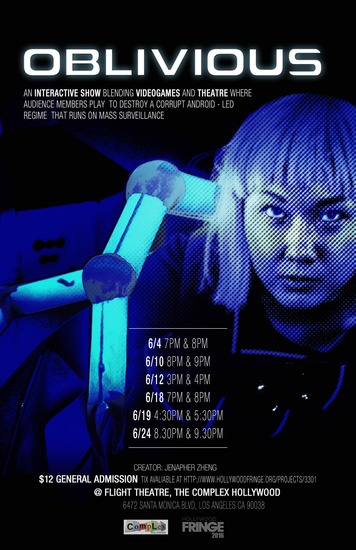 “Oblivious” is a new form of interactive show that creator Jenapher Zheng calls a Videogame Theatre Experience. We put videogame mechanics into a live theatre environment so the audience can play to claim an active role in storytelling. Audience members are given tasks to accomplish in the fully interactive space, and the consequences of those actions shape the course of the story.

In the fictional United Nation-States of Surveillance [UNSS], civil liberties have succumbed to a micro-managing government that uses mass surveillance to enforce hyper-consumerism. We’re eerily told that we are safe, simply because we are watched.

3 audience members are chosen to be new citizens of the country, and may be switched out for other players during the game. Before you can be fully inducted, a mysterious voice pleads with you to become revolutionaries that bring down the fascistic government by dethroning its robot dictator. Will you emerge victorious, or will this be game over for freedom?