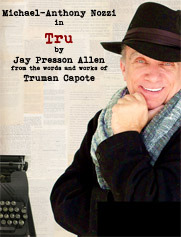 “Michael-Anthony Nozzi’s larger-than-life portrayal of Capote is so nuanced and complete, you will forget for awhile that you are not really in the presence of the great writer of Breakfast at Tiffany’s and In Cold Bloodas!” – Broadway World

“Michael-Anthony Nozzi is pure genius as Capote! He disappears in the part and you will be thoroughly entertained. Not one dull moment and it’s better than Cats!!” – Ted Ditwiler, star of Del Shores Sordid Lives.

The award winning Chromolume Theatre makes it Fringe debut with TRU, the Tony Award winning play adapted from the words and works of Truman Capote. Stage veteran Michael-Anthony Nozzi plays the prolific Truman Capote as he takes us on a journey through writer’s final days. An excerpt from Answered Prayers just hit Esquire Magazine and Capote inadvertently exposed his long time confidants, famed Manhattan socialites Babe Paley and Slim Keith. With both Paley and Keith turning the backs on Capote, he is now alone and lonely passing the time with with pills, vodka, marijuana, and chocolate truffles, all the while musing about his checkered life and career.

Directed by Tony and Emmy Award winner Robert Morse who originated the role of Truman Capote on Broadway, you will not want to miss Tru. Tru tells all!