Tom and Barry two nights only 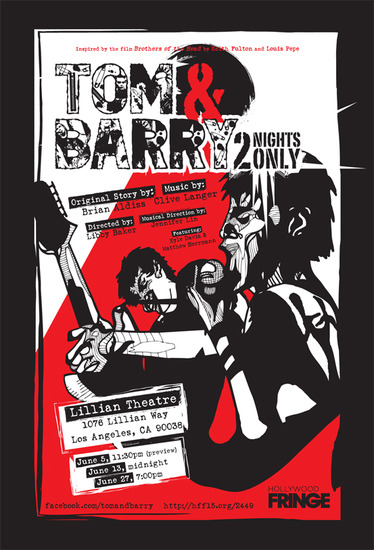 In this limited, sneak peak engagement, conjoined twins and punk brothers, Tom and Barry, perform musical selections from the debut album of their band, The Bang Bang. One part punk and one part pop, this duo is set to turn the world on its ear in this brand new, staged adaption of the Brian Aldiss book, BROTHERS OF THE HEAD, set to the music of Clive Langer.

A true Hollywood Fringe experience, TOM AND BARRY Two Nights Only, will be performed at the Lillian Theater in Los Angeles on June 5, 11, 13, and 27. This performance art piece is directed by Libby Baker* and stars Matthew Herrmann*, Kyle Davia, and Emily Alpren* in collaboration with a live band directed by musical director, Jennifer Lim. In addition to Lim on piano, TOM AND BERRY showcases the musical talents of band members, Carlos Flores, Frederico Orlandini, and Shawn Tseng, and features video appearances by Breon Bliss, Mickey Cottrell, Jenna Lex, and Rae Dawn Hadinger. (*denotes members of AEA)

This workshop theater event (adapted by Libby Baker) is inspired by both Aldiss’ 1977 sci-fi novel, BROTHERS OF THE HEAD, and by the mocumentary of the same name by directors, Keith Fulton and Louis Pepe. Aldiss’ story details the lives of two conjoined twins who, burdened by a third dormant head on their body, struggle with the resentment, stress, and success they experience as freak-show, rock and roll stars.

Aldiss, who has won numerous awards for his science fiction writing including two Hugo Awards, one Nebula Award, and one John W. Campbell Memorial Award, also wrote the short story “Super-Toys Last All Summer Long”, which was the inspiration for the Stanley Kubrick-developed, Steven Spielberg film, A.I. ARTIFICIAL INTELLIGENCE.

Fulton and Pepe’s film adaptation of BROTHERS OF THE HEAD depicts a dark tale of sex, strangeness, and punk rock music. Set in the 1970s, the film follows a music promoter who plucks the conjoined twins from obscurity and grooms them to be a freakish rock and roll act. BROTHERS OF THE HEAD features the music of Clive Langer, an English record producer, songwriter, and one-time guitarist with the British cult band “Deaf School.” Langer’s own band, “Clive Langer and the Boxes”, had numerous releases. He co-wrote the song “Shipbuilding” with Elvis Costello, and played organ on the Robert Wyatt version of the song, which was a Top 40 hit in the UK.

TOM AND BARRY Two Nights Only comes to life with lighting by Jeremy Pivnick, video projections by Marc Rosenthal, make-up by Linda Sammut, and costumes by Krystian Lorenzana. All production artwork is by Morris Eaddy. This Fringe Festival debut is produced by Herrmann and Vickie Mendoza and is stage managed by Terri Roberts.

Tickets are $15 and may be purchased online at www.hollywoodfringe.org/projects/2449. For the Box Office or further information, please call 323-962-1632.