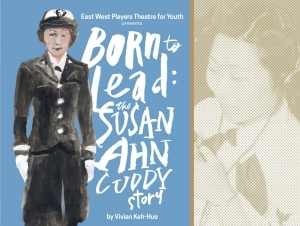 Born to Lead: The Susan Ahn Cuddy Story
By Vivian Keh-Hue
Directed by Jennifer Chang (Our American Voice and Animals Out of Paper)

Despite the challenges facing women and minorities of her generation, Susan Ahn Cuddy never took for granted the sacrifices of her democracy. With the freedom to speak her mind and make her own choices, Susan held fast to realizing her dream of one day becoming an officer in the U.S. Navy, persisting even though she was initially rejected because of her ethnicity. Her diligence paid off – she became the first female aerial gunnery officer in the history of the U.S. Navy, and by the time World War II ended, she had earned the title of Lieutenant. Through her choices and actions, Susan forged a life characterized by fearlessness and integrity, qualities which we attribute to our heroes. Indeed, in all spheres of her fascinating life, she was a trailblazer and her story merits telling.