TreeTalk. Jerome The Tree Man: How To Save The Planet 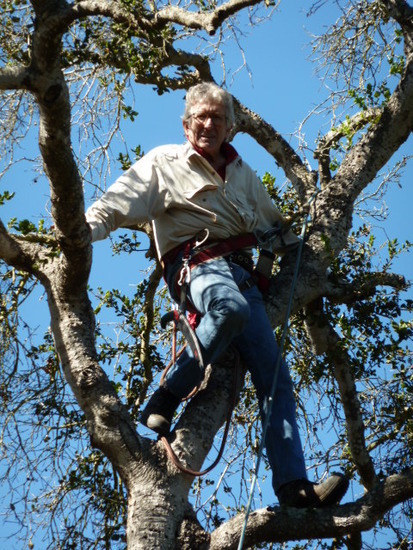 My One Man Show
TreeTalk

“Jerome the tree man tells you how to save the planet.”

Based upon a lifetime of working in trees since 1949, as a Certified Arborist (tree expert) I now speak out on their behalf about the urgency of taking action NOW to: stop global warming and ocean acidification due to burning of fossil fuels; stop extinction of species due to destruction of tropical and boreal forests and stop the population explosion due to poverty, ignorance, sectarian dogmatism and suppression of women.
It is the very personal story of my life working in urban forestry all over America from Central Park in NYC to The Getty Center in LA.
As a former hippie in ’60s San Francisco I have resolved my resistance to technology and accepted that it is our only hope: Nuclear fusion has the potential of providing infinite electrical power, pollution free, to the whole earth. Only lack of political will (ie. money) stymied by the oil and coal industries has prevented its development since the ’70s. Global warming must be stopped by 2050 or we face total global environmental collapse: melting ice caps, deforestation and ocean acidification. Nuclear fusion is the solution to global warming. With enough money (30 billion) it can be perfected within 15 years. America spent 15 years and 100 billion on the Apollo project to send a man to the moon. For what? After Pearl Harbor we mobilized all industrial production within 3 years to defeat Nazi Germany and Imperial Japan simultaneously on opposite sides of the globe. Today we face a much more immediate crisis: destruction of all life on earth: the sixth extinction.
Democratic revolutions are changing governments all over the world. How? Twitter, Facebook, email, smart phone video, social media, flash mobs…Technology in the service of life. America needs a GREEN REVOLUTION to save the planet.
“If the 99% voted, the 1% would not matter”
FUSION IS THE SOLUTION
Nuclear fusion is the solution to global warming.