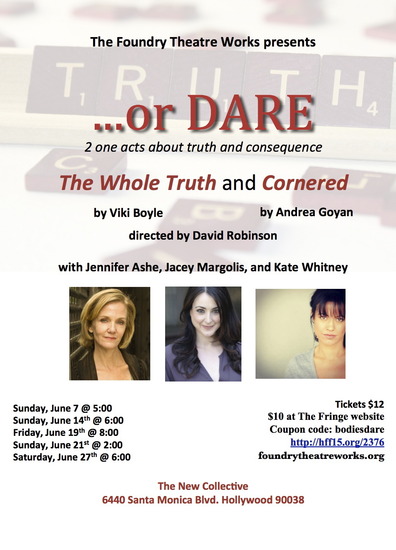 What would you do? Our two one acts confront the perception of truth. In “The Whole Truth”, sequestered jurors are on opposite sides in the trial of the century, both are right. Absolutely right. And in “Cornered”, a woman is trapped by a mysterious stranger and must confront her own fears to be able to break free.

Two provocative, funny and affecting one-act plays pit true believers with contradictory perceptions of the world against one another in …OR DARE — wherein lies the truth?, an evening that explores fact, fiction and the grey areas that exist between. From jurors arguing the intangible elements of a case to a menacing exchange with an unbalanced stranger, chance encounters between mismatched partners spark impassioned confrontations that force each to look outside her comfort zone, as a struggle for power erupts that will test deeply held beliefs.

In Viki Boyle’s “The Whole Truth,” a take-charge executive and an unassuming housewife face off when they are sequestered together during a high profile trial. One argues for conviction while the other leans toward acquittal, and each has reasons more private than they will admit. Razor-edged dialogue and unexpected revelations ask the audience to consider whether the facts can ever convey the whole truth.

Andrea Goyan’s “Cornered” finds Ruth, an off-duty waitress, approached by a mysterious stranger with an innocuous request. Initially sympathetic, Ruth soon finds herself ensnared in a dangerous game of Truth or Dare with an increasingly unsettling partner. Confidences and demands become more and more outlandish until Ruth must confront her new acquaintance. What she discovers is not what she expects.

Written by two acclaimed women playwrights and featuring a powerful all female ensemble, …OR DARE — wherein lies the truth? is directed by David Robinson and features Jennifer Ashe, Jacey Margolis and Kate Whitney. Produced by Ashe for The Foundry Theatre Works, the show begins a five performance run on Sunday, June 7, at the New Collective during the Hollywood Fringe Festival. Additional performances are Sunday, June 14 at 6 p.m.; Friday, June 19 at 8 p.m.; Sunday June 21 at 2 p.m. and Saturday, June 27 at 6 p.m. Running time is one hour.