The Women of The Hat...a duet for one 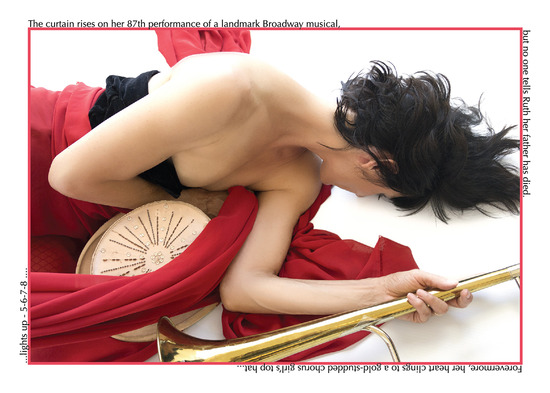 The “hat” being referenced is both a literal hat – the gold finale top hat used in A Chorus Line, and a two character play I wrote called, The Hat, which was performed at NYC Fringe Festival, 2013. The Hat featured live jazz trombonist, David Gibson, and is the source material for The Women of “The Hat.”(which ironically began as a solo project in a workshop with Anne Bogart’s SITI Company in 2008. The assignment was to create a five minute piece on the subject of “Loss.”)

Probably the most stunning event in anyone’s life is their first great loss. My father, who was a jazz trombonist, died while I was performing in a touring company of “A Chorus Line,” and the juxtaposition of Broadway glamour and grief was profound — and oddly theatrical — in my memory. This seminal event was the inspiration for both The Hat and The Women of “The Hat.”

While there are autobiographical elements, the story is told unconventionally – through movement, text, original jazz music, and iconic dance choreography from the Broadway show, A Chorus Line. In The Women of “The Hat," the male characters exist as a disembodied sonic presence – through voice over and music. The women are mother and daughter, Rose and Ruth. Rose, The Musician’s chorus girl turned 1950’s housewife, offers a fresh look at tradition when it comes to sustaining marriage to an artist. She poetically reveals her secrets in a pas de deux with an empty armchair. Ruth, The Musician’s Broadway dancer daughter, inherits both her parents’ artistry, but her free spirit has to learn to become its own muse when her connection with The Musician is broken.