King of Kong: A Musical Parody 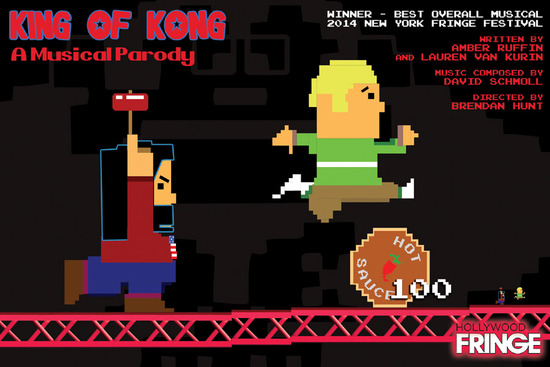 Meet Billy Mitchell, the calculating Donkey Kong champion from Hollywood Florida with everything: hot hair, a hot wife and a hot sauce business. Nothing can get in this reigning Donkey Kong Champion’s way. Or can it?

His competitor, Steve Wiebe, the life-long failure and gregarious sad sack with but one imperturbable skill: Donkey Kong. Can he finally succeed at the one thing that gives his life meaning?

Amber Ruffin (Writer) is a veteran of Second City Mainstage and Boom Chicago of Amsterdam. She currently is a writer and performer for Late Night with Seth Meyers, despite being from Nebraska.

Lauren Van Kurin (Writer/Steve) is an actress-improvisor-writer-dancer who hails from Yorba Linda, CA. She can be seen improvising every week at iO West on the Harold team Max.

Brendan Hunt (Director/Billy), a native Chicago, is now an actor and writer based in Los Angeles. His award-winning play Absolutely Filthy won multiple prizes at both the Hollywood and New York Fringe Festivals. With Amber Ruffin unavailable for the Fringe, this will mark Brendan’s debut as Billy.

David Schmoll (Composer) hails from Ohio, and has been Musical Director for Second City Cleveland and Boom Chicago of Amsterdam. His music has been performed by Jack Black on Late Night with Seth Meyers.