The Legend of Bobby Darin: An Unauthorized Autobiography 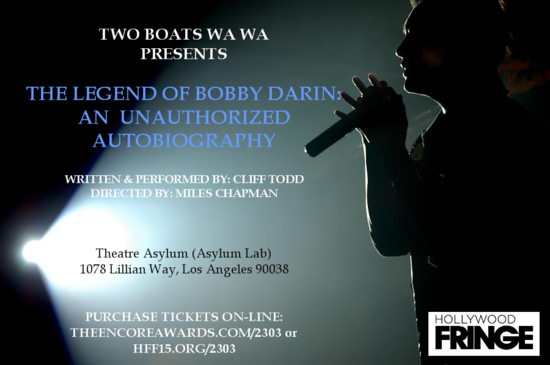 Who Is Bobby Darin? Give up? THE LEGEND OF BOBBY DARIN: AN UNAUTHORIZED AUTOBIOGRAPHY is a world premiere, musical, one-person show about the life and career of one of the twentieth century’s most exciting, versatile and underrated performers. Bobby (as played by Cliff Todd) gets one last chance to explain through stories and song why his life is important and why he believes he should be remembered. You’ll hear some of Bobby’s greatest songs including Splish Splash and Mack The Knife.

During the 2015 Hollywood Fringe Festival, THE LEGEND OF BOBBY DARIN was awarded Combined Artform’s Pick of The Fringe and was chosen as of winner of The Encore! Producers’ Award.

“This is the absolute best the Hollywood Fringe Festival has to offer… a sublime hour of first-rate entertainment.” -Todd David Schwartz, KRLA radio

“This brilliant performance takes an intimate glimpse into the life and soul of the late great Bobby Darin. Cliff Todd seems born to play Bobby Darin… He looks and sounds the part.” – Bonnie Priever, The LA Examiner