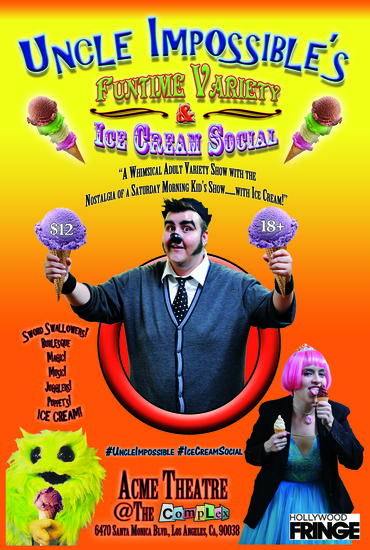 The original Uncle Impossible was an Imaginary Friend & beloved Children’s Show Host paving the way for those like Captain Kangaroo & The Muppet Show. Later in his life, he became a recluse & a shut-in up until his passing. Upon his passing he left a large inharetance to his only living heir; his estranged and eccentric nephew Rex The Impossible. In his Uncle’s will, it states that Rex would inherit the large fortune only if he continues his beloved uncle’s show “Uncle Impossible’s Funtime Variety & Ice Cream Social”. Rex agreed to the terms, but decides to do it HIS way, making it an Adult Version of a Saturday Morning Kid’s Show.

With the help from his Oddly Sweet Sidekick; Princess Bebop A’Lula, Rex The Impossible brings the new “Uncle Impossible’s Funtime Variety & Ice Cream Social” on stage by blending the Whimsy of Saturday Morning Kids Shows & Cartoons that we all know & love with Zany Adult themed Variety Acts creating an off the wall experience…….possibly with Ice Cream.

Every Show has Different Performers!!