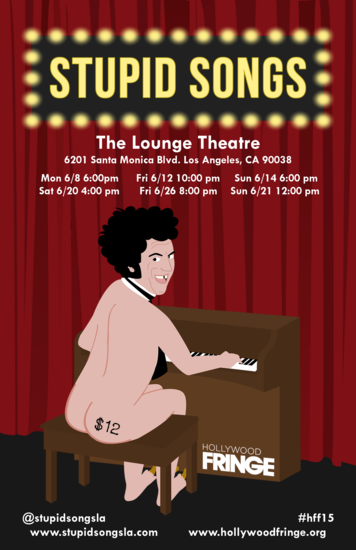 *WE HAVE A FEW SEATS AVAILABLE AT THE DOOR! COME ON DOWN!

“If you’re a fan of Weird Al, have the old albums of Allen Sherman or P.D.Q. Bach or Tom Lehrer, if you find yourself singing Python’s “Spam Song” in the shower, then this is a show for you." Ernest Kearney, TheTvolution Review

STUPID SONGS! is a troupe of funny folks who can sing their faces off. Its members are working professionsals in theatre, television and film, many of whom met while studying at The Groundlings Comedy School. Stupid Songs was founded in 2013 by Keri Safran, who serves as both Director and performer. Dan Wessels serves as the Music Director.

OUR MUSIC! Most of our songs are written by the Stupid Songs performers themselves (with a parody of an existing song or two thrown in)!

Check out some of our AMAZING REVIEWS!

“THEY SENT US THEIR PRESS RELEASE.”
StageRaw LA
(actually, Stage Raw just gave us such a marvelous review we just threw up on ourselves a little. Have a look! – Stage Raw Review.)

“WE THOUGHT THEIR EMAILS WERE SPAM.”
LA Weekly

“THEY MISSED THE DEADLINE TO ADVERTISE IN OUR MAY PROGRAMS.”
FootLights

“NO CATS WILL BE HARMED IN THIS PRODUCTION.”
Tippi Hedren

“I CAN’T FIND ANYONE TO USE MY COMP.”
Brenton Kossak, Stupid Songs Bass Player