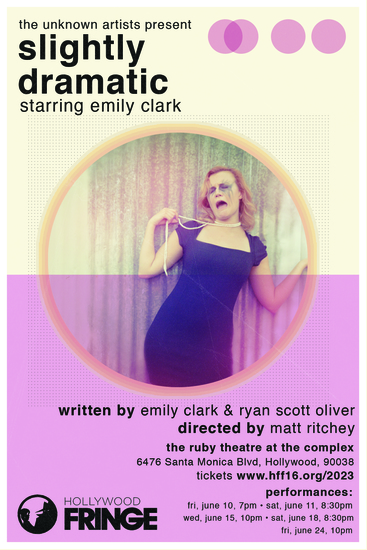 RECOMMENDED by FringeReview.com
“Slightly Dramatic is a really good example of a type of show that is often done badly, it might restore some of your faith in the form." – Guy Picot

Catch Emily Clark in her semi-autobiographical cabaret and learn of her semi-triumphant rise to semi-stardom. Besides, a li’l drama never hurt anyone…

Featuring a book co-written by musical theatre phenom Ryan Scott Oliver (Jasper in Deadland, 35MM, We Foxes), Emily will bring you true-to-life tales about dead dogs, mean girls, bipolar boyfriends, and Bernadette Peters. This show has something for everyone…if you’re a Broadway geek, or a gay man, or lived through the 90’s. Or all of the above.

SLIGHTLY DRAMATIC has been taking the coasts by storm since 2009 with notable performances in Los Angeles and New York City, most recently at the Laurie Beechman Theatre.