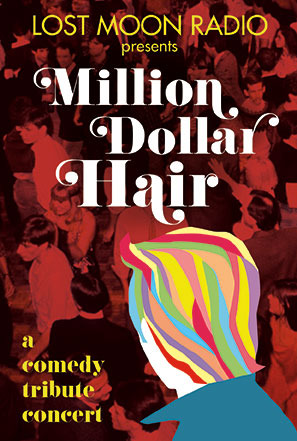 Lost Moon Radio (“Top of the Fringe” 2012, “Best of Comedy” 2011) invites you to celebrate the life and death of fictional music icon Bernie Schonfeld in this unforgettable tribute concert. Over five decades in the industry, the groundbreaking music producer, record label owner, and amateur homeopath made history with his nontraditional taste and unforgettable haircut. Learn of his adventures (and scandals!) from the rock stars, legends, and family members who knew Bernie best in this song (and joke!) filled evening. If you combined Dylan going electric with the premiere of Stravinsky’s “Rite of Spring” and poured it over the Beatles at Shea Stadium, that event wouldn’t be half as big as Million Dollar Hair.