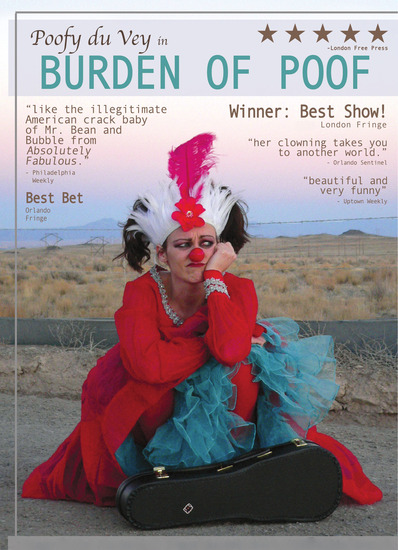 “Burden of Poof”, the award-winning solo, adult clown show from New York’s Courtney Cunningham, stars Poofy du Vey: a bundle of nerves with big dreams and even bigger fears. Poofy’s got a lot to say if she could only remember what that was. As Willa Rohrer of the Philadelphia Weekly put it, “I guess we all have a little bit of Poofy inside of us”.

Born in the underground theatres of the NYC downtown variety scene, Poofy du Vey made her world premiere at the Winnipeg Fringe Festival. She has since been presented in theatres and festivals throughout the US and Canada, and “Burden of Poof” made its Los Angeles debut at Schkapf on February 1st of 2014.

(Adult themes… not for kids.)

“This one woman show from New York’s Courtney Cunningham is a delight. This kind of clowning is some of the most creative theatre at the fringe.” – Winnipeg Free Press

“beautiful and very funny. If you’ve never seen a real clown show before, this would be a great place to start.”- Peter Vesuwalla, Uptown Weekly Magazine

“hilarious and addictive… the result is both powerful and pure.” – Liz Withey, Edmonton Journal

“It takes real art and timing to be a comedic actor. Some of the greats like Carol Burnett, Lucille Ball and Lily Tomlin have paved the way for women in comedies. Enter Courtney Cunningham as Poofy du Vey. With quick wit and timing, Cunningham can easily parlay any line into comedy.” IQ, Albuquerque Weekly

“…has you engrossed from the onset. Courtney’s natural ability to interact with the audience is just one sign of the many talents this actor has mastered.” – Beth Marshall,
Producer of the Orlando Fringe Festival

“… a quality production where the main character leaves her heart on the stage. I can’t stress enough how this show has restored my faith in theatre.” – Robin Duff, Squigfest Producer, Toronto, ON