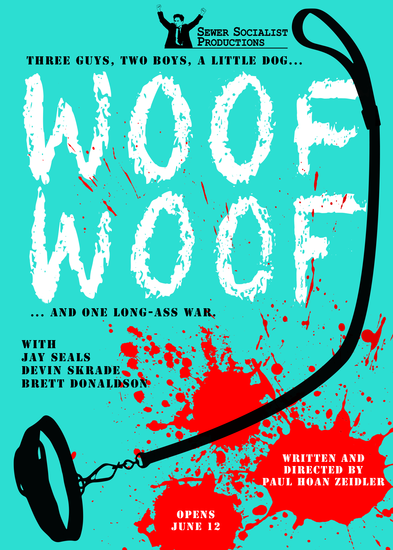 “An electrifying new show…. I was knocked out.” — Kurt Gardner, ArtsBeatLA

“Paul Hoan Zeidler has written an impressive script that is truly brought to life by his brilliant direction and an amazing cast…. This play moves you, and leaves you in a different place than when you first entered the theater.” — Bob Leggett, L.A. EXAMINER

Read our “Voices From the Fringe” interview on Bitter Lemons:
http://losangeles.bitter-lemons.com/2014/06/19/voices-from-the-fringe-paul-hoan-zeidler-author-of-woof-woof/#sthash.nHbYg9xe.pM0HlIUo.dpbs

Jimmy, an Iraq war vet grappling with a traumatic brain injury and PTSD, is discharged from a Warrior Transition Unit at a U.S. Army hospital in Washington, D.C. Instead of returning to his family in Philadelphia, he hitchhikes to New York and arrives on the door of his childhood friend. Chuck is surprised—he hasn’t seen Jimmy in 8 years—but when he learns it’s his old buddy’s first day out of the Army he convinces his roommate Brandon to bring him along on a wild night of clubbing. When a long forgotten, brutally violent incident involving Chuck and Jimmy is revealed, conflicts escalate before the three can get out the door.