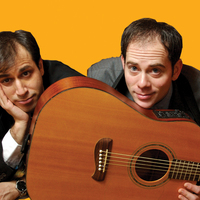 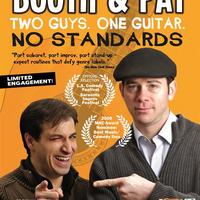 After taking the East Coast by storm, the irreverent music/comedy stylings of Booth & Pat are heading to the Hollywood Fringe 2010!

“The Smothers Brothers on crystal meth” (Broadway World), Booth & Pat present an hour of song, shtick and sketch idiotic in its observations, but ridiculous in its infectiousness. From the original and insightful “Where Have All the Straight Girls Gone?” lamenting Pat’s ability to convert the women he dates into lesbians, to a skewering of the beloved “Let It Be”, to a parody of Justin Timberlake’s “SexyBack” where the undynamic duo dream of all the outdated things they could make stylish(#I’m bringing dial-up back / Those slow connections are where it’s at#).

It’s like Entourage. Minus the cars. And the money. And the HBO contract. But with singing!

Booth Daniels and Patrick Frankfort (and his guitar) met while studying at The Boston Conservatory. And after a decade of twisted tomfoolery, insomnia-induced ramblings, and disagreements over whose name should be first, Booth & Pat was born! In New York, they’ve appeared at Carolines, Gotham Comedy Club, Comix, Rockwood Music Hall, Mercury Lounge, Crash Mansion, The Duplex, Don’t Tell Mama, the P.I.T., and Broadway Comedy Club. Gathering an armful of rave reviews and a new legion of fans, Booth & Pat are regulars on the Joey Reynolds Show on the WOR Radio Network. Selected for the 2008 Los Angeles Comedy Festival, in 2009 they were nominated for a MAC Award and headlined the Sarasota Improv Festival in Florida. Now, New York’s most preposterous music/comedy duo return to the West Coast this June 21-25 with Booth & Pat: Two Guys, One Guitar, No Standards. Be there or be square! (oh yes, we said it).

WHAT THE PRESS HAVE SAID ABOUT BOOTH & PAT:
“Their approach to comedy is part SNL and partly rooted in the adversarial style of the Smothers Brothers…their appeal is infectious.” – Cabaret Exchange.

“The compact and hyperkinetic Daniels and the stringbean Frankfort wring geniune laughs from their horseplay, and they choose comic ditties they can make something of.” – Backstage.

“These guys are hilarious. With nary a punch line they deliver solid character humor that brings a 21st Century edginess to the old tradition of comedy duos.” – Broadway World.