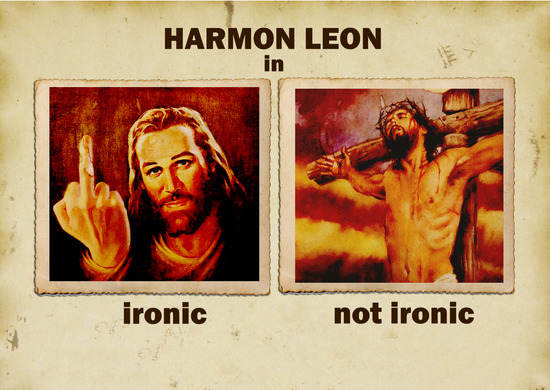 Direct from his critically acclaimed show at the Edinburgh Festival in Scotland and the Adelaide Fringe Festival in Australia. Award-winning New York author, filmmaker, and comedic performer Harmon Leon brings you, Ironic/NOT Ironic.

In the end, you’ll look at the entire world and contemplate whether it’s ironic or NOT ironic.

Harmon Leon knows irony. This is a man who has made a name for himself by adopting clever personas and disguises and infiltrating such TV shows as Blind Date, The Judge Joe Brown Show, and Whammy:

“A comedy force to be reckoned with.” *****Edinburgh List

“Leon takes a risk with his comedy and audiences should too.” **** ½ Adelaide Advertiser

“This was the kind of risky performance the Fringe is supposed to be about. See this if you truly want to see something edgy, funny and different!” Rip It Up/Australia

Harmon Leon is the author of 6 books, including National Lampoon’s Roadtrip USA. Maybe you’ve read Harmon’s columns on Huffington Post.
His other writing can be found in Esquire, Playboy, Maxim and Huffington Post.

He has appeared on the Howard Stern Show, Last Call with Carson Daly, Penn & Teller’s Bullshit, and Spike TV’s 1000 Ways to Die. He’s performed at the Montreal, Edinburgh, Vancouver, and Melbourne Comedy Festivals.