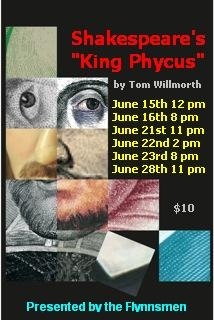 “King Phycus! A smarter, funnier, Python-esque take on the “Complete Works” mash-up concept. The ensemble is well-focused and fully committed to their ridiculousness. " -LAtheatercritic.com

“Spoofing the source material requires large doses of shtick generously applied with the utmost precision, both in language and physicality, to make it all work and this cast is on fire!” -Shakespeare in LA

“I’m going to say it right up front, of all of the shows I’ve seen so far at the Hollywood Fringe Festival this year, King Phycus is the cream of the crop…Everyone is instantly and fully recognizable and the threading of each of the stories is so seamlessly done, if I knew nothing about a Shakespeare play, I’d think I was watching one of his original stories verbatim. It’s that good!”- Gia On The Move

An Historical-Pastoral-Tragical-Comedy in Five Acts. All the plots of Hamlet, Romeo and Juliet, Caesar, MacBeth, and Richard III combined in a whirlwind of iambic pentameter consisting of thousands of characters played by 6 actors (…at one point a single actor plays 20,000 Romans). Rumored to be Shakespeare’s earliest work which he later edited into 7 or 8 minor plays. Delight will be found in buckets of wit and fanny-packs of knock-knock jokes. Written by Tom Willmorth. Directed by John Apicella.