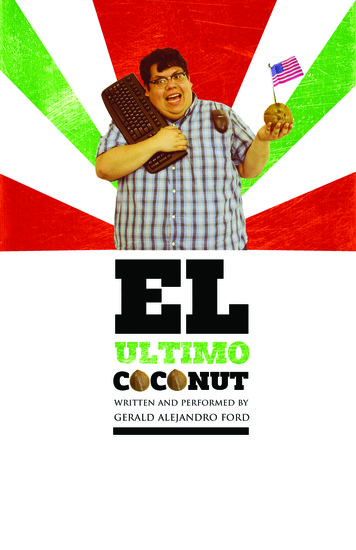 Socially awkward Mexican American teenager Coco has no trouble talking to his blog follower “Minions”. Talking to his mother is a bit more difficult, especially as she makes him sit in his special chair.

El Ultimo Coconut is a coming of age tale about a young man navigating many different worlds. The massive multiplayer role playing game World of Warcraft, the Arizona/Mexico border, and the family dinner table all provide canvas for his incredible journey as he carves out a sense of identity and tries to get into MIT.

In this solo show, Gerald Alejandro Ford takes on the both family politics and cyber-nerdom with humor and humanity. Ford embodies all the characters, from the polar opposite twin brothers at the story’s core, to vigilante border patrols, Mexican strippers and the boy’s protective emotional mama.

“Ford shines in his own work. He nails a broad spectrum of comedy, leaping in and out of multiple characters in seconds, managing to make them all sympathetic but skewering all of them for their weaknesses—including the occasionally frightened and self-entitled coconut. El Ultimo Coconut feels a little rough-hewn in spots (it is an extension of a student project, after all) but is consistently entertaining and even shows glimmers of brilliance.” –The Stranger

“Ford’s work is well written and was executed with bold energy. Three seconds in and I wanted to hug him. SO ADORKABLE! …. If you ever tried to go against the grain of your heritage because the deep longing in your heart wouldn’t settle for anything else – you will relate. If you ever renounced your family, your past, your skin, your roots to save your own ass (or face) – you will relate to this show. Good art is like that… and ‘Coco’ is beautiful like that.” –Theater & Its Trouble

“[Ford’s] fish-out-of-water antics and double-takes provide many of the laughs, which burble forth throughout, but the howls of laughter come from his mom’s demand, when she has something weighty to say, that Coco sit in his chair. Without going into it, the chair has a way of symbolizing the way moms the world over fight the future in which their children have grown…. The strength of the show lies in how packed it is with candid observations of daily life for a Mexican-American family living in Arizona, and the multitude of borders jammed into a single living room.” –The Sunbreak