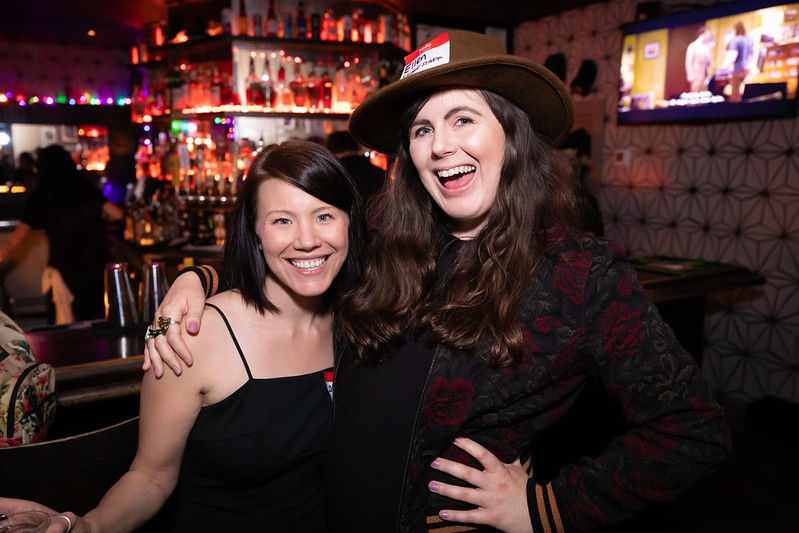 Getting to know Lois Neville and Ellen Boudreau Den Herder

I moved to Los Angeles in 2005 to study musical theatre at AMDA. After graduating, I started working industry events and education gigs like film premieres at The Arclight and presenting workshops at The Florida State Thespians Festival. My eyes were opened to a facet of the arts that I was unfamiliar with, but was starting to flirt: arts administration.

I joined the Hollywood Fringe team in 2010 and haven’t looked back. Through my time at Fringe, I’ve discovered my artistry is behind the curtain. My true passion is supporting other artists on their journey and creating a community where everyone feels they belong.

I’ve worn many hats at HFF over the last decade; Volunteer, Bartender, Food and Beverage Director, Partnership Director, International Ambassador, Operations Director. All of these hats make for a very full closet but have also given me hands-on experience in all of the different moving parts of the festival.

Beyond the festival zone, I hail from Seattle and I’m the proud godmama of two of the most amazing two-year-olds in the world (ask me for pictures!). I love to dance, re-watch The Office, and travel. I equally enjoy a blazer and a flannel, and I think that fact says it all.

Hollywood is my home. (Yes, I live in the Fringe Zone) I moved here shortly after graduating, and I have vivid memories of the first time I walked down Santa Monica Blvd. I was exploring my new neighborhood, and I found honest-to-gawd theatres at every turn. Right here. In Tinseltown. It was like a magical sign, and often I found myself walking Theatre Row just because it felt right.

I was first introduced to HFF in 2010 when my friend Bryan Burgess (of Bryan’s Bar, the infamous Fringe Central bar) asked if I’d put on a bright orange unitard and play a Fringe Freak in one of FringeTV’s first original productions, “A Family Affair”. I had no idea at the time that a ridiculous favor for a friend would make such a tremendous impact on my life for years to come.

All these years, hats and walks down Santa Monica Blvd later, and I have only fallen more in love with this festival and community. HFF is my longest relationship by far. With Fringe, I found a home and a community that inspires me. The Fringe Zone is my neighborhood, the people in the theatres are my friends, and the artists who share their stories and hearts on these stages are my community.

Thank you for being a part of Hollywood Fringe. Thank you for showing up and sharing your talent, your story, and your spirit with this festival. You, as an individual, are a vital contributor to the Hollywood Fringe. Our festival is merely a platform for the many voices that show up each year. I serve at the pleasure of every artist who chooses Fringe, and I am humbled by the opportunity to do so.

I’m an arts programming specialist that’s been working in nonprofits around Los Angeles since 2014.

As HFF’s Programs Director, I’ve sought to create programming that connects HFF with the LA Theatre community at large. I helped create Fringe Scholarships, HFF’s initiative to help expand and diversify the pool of artists participating in the festival, as well as ran our workshop series and events. Other programs I’ve championed are the Access Committee, the Artist Fund, and our accessibility initiatives. You’ve probably seen me running around the Festival grounds, hopping between shows with an iced coffee in hand and a huge smile on my face. Fringe is my favorite time of year.

Outside of the Fringe, I’m a visual and performing artist, administrator and community programs professional. I’ve worked in programming and engagement with companies such as B.R.I.D.G.E Theatre Project, Grand Vision Foundation, and The Industry Opera LA. I’ve also participated in Cornerstone Theatre Company’s Summer Institute and the Arts for LA ACTIVATE program to further hone in my community-first practice of engagement and programming. As an artist, I’ve dabbled in improv comedy, songwriting and composing, immersive installation work and video art.

As a person, I’m obsessed with my cat, Toast and rewatching network comedies that I can quote by heart.

Before joining the Fringe staff in 2016, I was a classically trained musician and arts administrator, searching for community through the music world, and I just wasn’t finding it. From orchestra management to opera stage managing, I jumped job to job looking for a space to call home.

My first introduction to theatre was working at a call center in 2013 selling theatre subscriptions and I kept hearing about this thing called Fringe from my desk partner, Les Kurkendaal, who toured (and still tours) Fringes around the country (and also, I would get the pleasure of working with Les again in 2016 in the creation of the Fringe scholarship program).

Although I didn’t see my first Fringe show until 2015, the name stuck around and when I saw a position for Outreach Coordinator pop up, I made the decision to apply and see what happens. My life changed that year, as I found my home, my family, my community, and I’ve never looked back.

The Hollywood Fringe participant base is an incredibly special community– I’ve never seen any other group of people support each other with such vigor and enthusiasm. The kindness you all show each other (and me) inspires me to be a better person every day, and I wouldn’t want to work in any other environment.

Why Fringe? Because I can’t imagine my life without it.

To the Fringe Senior Staff from the new executive team

As a team, we couldn’t be more thrilled to set off on this new adventure with a senior staff that we have both had the pleasure of working with since the beginning. Bella Luna and Stina Pederson, this festival would not happen without your passion, hard work, and dedication to this festival and community. Your contribution is what makes this all possible.