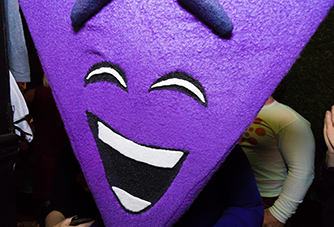 Purple wants to thank you for helping to make this our most successful year yet! // Photo: Matt Kamimura

Official HFF17 Stats: Bigger Than Ever

This year’s numbers reflect a growth trend that has been in place since the festival began in 2010:

The central Fringe organization doesn’t retain any of the ticketing proceeds; all $540,000 have been returned to Fringe artists and venues.