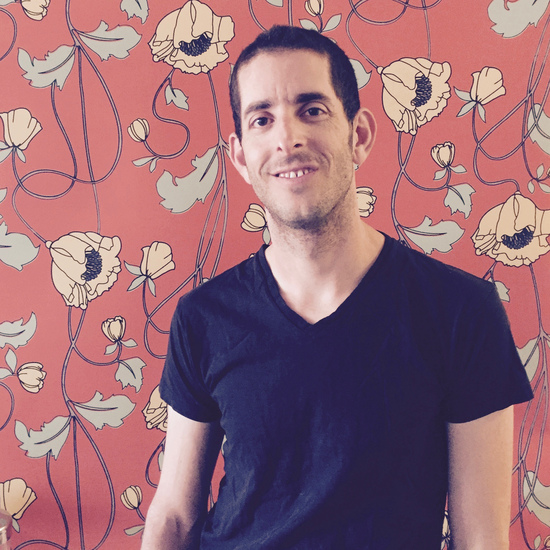 David Offner has been the scenic designer of Fringe Central for the past three years.

For the past three years, I have taken an almost empty space, and turned it into a place for socializing, drinking, networking and anything in between. Hi, I am David Offner, and I am the scenic designer for Fringe Central.

My first design in the Hollywood Fringe Festival, was back in 2013. I was working with my longtime collaborator and very dear friend, Brandon Baruch, on a Fringe show that he had written. Then in 2015, Dave McKeever had asked me about designing a “bar space” at the Dragonfly. This would become our first year here. We walked into the smaller side of a very dark, dingy space, which had a TON of potential. We didn’t have a lot of money for budget, but when do we ever have a lot of money in theater?!?! That first year at the Dragonfly, we hung paper parasols upside down, and Brandon lit the hell out of them! It was a simple, cheap, and colorful design.

The way the designs come together is a pretty simple story. Usually around February or March, Dave, Brandon, and I meet at the Holloway Bar in Echo Park (free publicity for the Holloway Bar), and we start riffing on design ideas. For the past 3 years, we have sat down in a bar and have come up with Fringe Central concepts over a pint of beer. Thanks for paying, Dave! From there, I get to start laying out the design that eventually becomes Fringe Central. I’ll start with research ideas, and then turn those into sketches, renderings, and plans. There are always a few key points that the Central space needs to address. The bar, the concierge space, and the ability to promote your show. These are all VERY different challenges than we normally have to deal with in theater. Instead of designing for a 99 seat house, where scenery has to travel in or out; I need to worry about foot traffic, if there is room to get to the bar, space for posters…or how the smoking porch will look.

Designing Fringe Central is a wonderful time in my year, because I get to break the fourth wall. The audience actually interacts with the set…whether I like it or not. I might have a vision in mind for how it should look in its purest form, but the minute post cards, posters, and beer bottles arrive, it becomes a completely different space. I think over the last 3 Fringe’s, I have embraced these changes, and built that idea into the design.

One of the most important aspects of the Fringe Festival, is that I work with incredibly talented people. We are basically glued to the space for 2 weeks, and take it from a building that is under construction, as it was this year, to a full functioning theater/bar. I believe that you are only as talented as the people that work with you. A HUGE SHOUT OUT to the scenic crew that makes the space look as good as it does. For the last three years, I have worked closely with Miles Robinson, Sara Paquette, and Brad Bentz (please hire them), plus many other interns and volunteers who bring their skills and artistic sensibilities to the project. It takes a village to make a Fringe.

I hope you all enjoy drinking at Fringe Central!!!