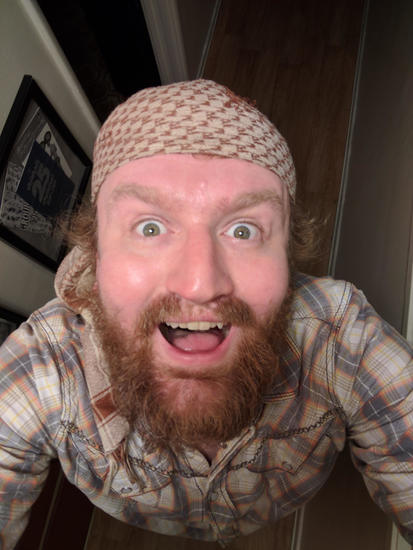 A masterful selfie by our favorite Tech Director.

Hi folks, my name is Corwin; you’ll usually see me fixing some technical thing somewhere, or telling longwinded stories that go nowhere. I wandered into the first Hollywood Fringe Festival with Theatre Unleashed, the first company I worked with in Los Angeles. I was doing sound design for “Friends Like These,” a piece which has since gone on all over the place.

I took to the big tent at Artworks right away. Y’know, there’s not an awful lot of hang-out time when you’re cobbling together a career out of freelance work. I’d never had a chance to share the space with so many cool artists doing something brave and interesting. It was literally happening all around us. There was an all-encompassing sense of activity; the collaborative doing of many things.
Conversations (and beers) flowed. I met so many people, I made it my business to get involved with something every year. Since then, I’ve worked on at least one show every year, usually several. I’ve seen a hundred and something shows over the life of the Hollywood Fringe Festival. I’ve met several times more passionate artists nervously launching a new piece in front of a crowd for the first time.

So, if this is your first time, find me at Fringe Central and let me know how it’s going for you. At this point, you’re probably a little stressed, not quite sure how it’s all going to come together. Literally everyone else has passed through this phase as well, and everyone who’s participated more than once signed right back up for that feeling again.

Will it work? Will we get the props finished in time? Is this song too corny? Should we have added more light cues? Do I still have time to squeeze in rewrites?

Quite simply, don’t stress. Don’t let fear be your barometer for success. What you’re taking part in – and back me up, returning folks – is the most enriching experience producing theatre in Los Angeles that you can have. Thousands of people are coming to see a show or two in particular; they may not know anything about your show yet. A postcard here, a poster there, a friendly chat at Fringe Central or in a lobby and you’ve got an audience you never even knew existed.

It goes further than that. I’ve had acquaintances turn into friendships, metamorphosize into long-term artistic collaborations. I’ve had about a hundred jobs float effortlessly into my hands because of the chance meetings I’ve had, wandering around Hollywood in June. I’ve been lucky enough to be offered projects that proved to be some of the best work I’ve ever done, just by showing up, being friendly, and sharing a table with a perfect stranger.

But that’s not even the best thing. The best thing, the thing that keeps me coming back every year in whatever capacity they’ll allow me, the biggest and most poorly kept secret is this: There’s absolutely no telling what treasures this year may bring. There’s no way of anticipating what you might see, who may see you, what breakout successes and spectacular failures may befall any of us. Those of us that return would love to tell you our stories from the past, but the reason we keep coming back is the future.

Which is about to become one hell of a fantastic now.

I’m excited to see what you’ve brought to our potluck. It doesn’t matter if you’re a great chef or just toying with your ramen recipe. You made it, you brought enough to share, and we’ll all dine at this buffet until we’re just shy of bursting.

I do hope you come back for seconds.