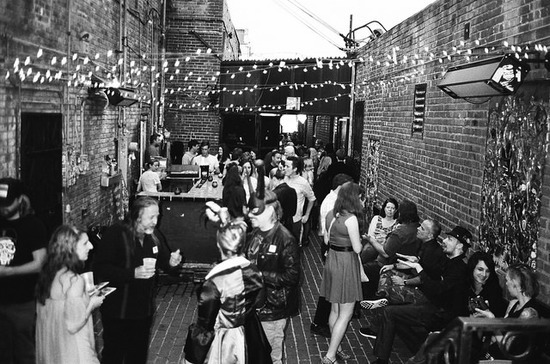 We are returning to the same space that hosted Fringe Central during HFF15 & HFF16, but the space is under new management. // Photo: Matt Kamimura

The 2017 Fringe Central social space will be hosted at a new club located in what was formerly known as The Dragonfly, on Theatre Row at 6510 Santa Monica Blvd. The venue is set to open in June, with Hollywood Fringe being one of the first guests of the new club. We are happy to return to this space and excited to see what the new management will develop!  Fringe Central is the community center of the festival, featuring major Fringe events, concierge staff, and the festival box office, as well as free programming, food trucks, and Fringe merchandise. The space serves not only as a place for Fringe-goers to unwind but also as a gathering place for those wishing to network, distribute flyers or hold meetings. This is also the location of Bryan’s Bar, the infamous Fringe watering hole, designed as a place for artists, audiences, producers and local community members to mix and mingle. Anyone with a Fringe Button will receive discounts on Fringe bar items as well as deals at local Hot Spots.  Fringe Central will officially open to the public on June 7th for the Opening Night Party. There will also be a Fringe Runway event, a Fringe Prom, and regular installments of Fringe Cabaret (the sampler platter of the Hollywood Fringe buffet).  The venue is 18+ only.