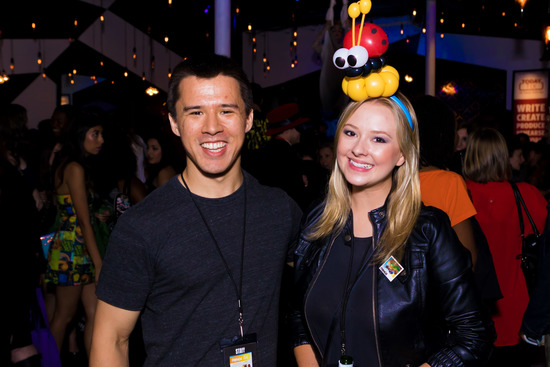 The Interns: Looking Back on HFF16

The Hollywood Fringe Festival would not be able to operate every year were it not for an army of volunteers and a few hard-working interns. We recently reached out to this year’s interns and asked them to write a few short paragraphs about their experience. Here’s what they had to say.

Throughout the three weeks that I volunteered for Hollywood Fringe, I was often met with surprise when I described my background and interests. “So, what is a musician with almost no theater background doing interning for this theater festival?” A reasonable question. I have worked for another fringe festival, the Rochester Fringe Festival, as a production assistant since 2014. There I am responsible for things like booking acts for outdoor stages and managing an interactive guided tour (“remote x”). The Rochester festival presents theater, music, dance, film and spoken word. That brings me to Reason Number Two for why I feel right at home with the Hollywood Fringe staff, participants and supporters.

I have always found that whether it be drama, music or elaborate model train stations, passion looks the same in everyone. I’ve seen it in my multidisciplinary collaborations, I’ve seen it as a teacher, and I saw it this past June at Bryan’s Bar. Ask someone about their show and you will see that animated face, gesticulation and shifting posture that I love. The enthusiasm extends to other shows, which is why every award at the closing award ceremony is met with resounding applause. That is, in my opinion, at the heart of what makes people keep coming back to the Hollywood Fringe Festival. This is an energetic community where audience members mingle with participants and the line between performer and supporter is blurred. The great shows probably also have something to do with it.

I look forward to seeing the festival grow even further in the coming years. I am relatively new to Los Angeles and I feel lucky to have found this community so soon. Some people might know this, but the community I have described isn’t quite consistent with the world’s image of LA. I had heard about the record executives and multimillion dollar action films, but not so much about the authentically human theater scene that I have recently encountered. Festival director Ben Hill tells us about the skepticism he faced when first pitching Hollywood Fringe: “LA isn’t a theater town.” It would seem that it is, and more people are growing to know that every year.

In the dismal months of late winter, the ones that seem excruciatingly slow, when the excitement of the holidays and opportunities to travel and see real live snow are over, one finds themself inevitably looking toward one thing: summer. Yes, even in Los Angeles we still look forward to summer. Summer is and always will be the light at the end of the tunnel, the time when it’s acceptable to cash in and sit back and drink way too much rosé (especially if you live in the greater Los Angeles area). However, for those working at the Hollywood Fringe Festival, such is not the case. Well, except perhaps for the rosé.

I decided to apply to join the Fringe team after I had experienced Fringe festivals in other cities. I did my research, and slipped in my application just in time. I’d be lying if I said I was excited to work for free (let’s be honest the non-profit world is an unforgiving one), but I’d also be lying if I said I regretted it. The combination of the phrases “theater” and “non-profit” would probably give any self-respecting and financially responsible citizen a heart attack (yes, I’m talking to all of you with cushy financial jobs), but to the few of us masochistic plebeians still running the streets, it stirs our bellies with possibility and excitement.

What people may not get to see is how much unforgiving, unacknowledged work goes into creating such an open, uncensored arts platform. There was no summertime stolidity. The Fringe team never stopped. They never stopped for the performers, the audience, the Los Angeles community. They never stopped, because the performing arts community is not dead (screw the cynics to the sticking place!).  We are and always will be here; louder, smarter, and freer than ever. We are the arts anarchy, with the heart of punk and little less style. And hey, we like our rosé too.